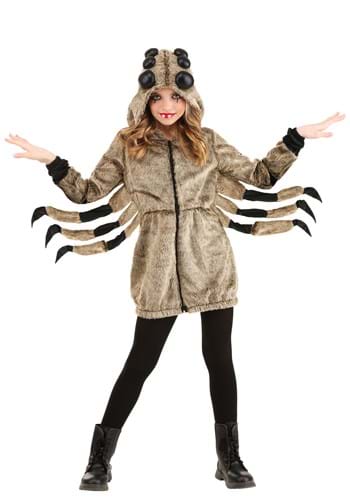 Is your child the type that always begs you for a new pet? While some kids are content with repeatedly asking for a puppy, others have a more diverse interest in animals. They’ll insist that snakes are “adorable” while you shudder at the thought of having to feed one. Or maybe they really want a couple of mice, but you just couldn’t stand having scampering rodents in the house. We think one of the creepiest pets that your child might love to have is a tarantula. And sure, they’re fuzzy, but that’s not usually considered an endearing aspect of arachnids. For most people, when it comes to spiders, the hairier they are, the scarier they are! If your kid won’t stop asking for a pet tarantula and you’re not too excited about buying a real one, perhaps they’ll be content with a fuzzy costume instead.

If your child is interested in creepy crawly animals, they might like this Cozy Tarantula Costume! We designed it to help your child live out their spidery dreams. The hooded jacket has an elastic band in the middle to imitate an arachnid’s sectioned body. Another trademark of spiders is their eight legs. Since most humans only have two, we made a few extra for this costume. They’re attached to the sleeves with clear wire so they can move when the wearer’s arms do. We also added some extra eyes onto the hood of the costume so your child can easily have eight of those as well. For a finishing touch, your child can decide whether to be scary or sweet with the help of a little face paint. Add some fun legwear and their favorite pair of shoes and they’ll be ready to weave a candy-trapping web!

Whether they want to be horrifying or they genuinely think spiders are great, your child will have a great time in this Cozy Tarantula Costume. They’ll be able to feel creepy and cuddly this Halloween!