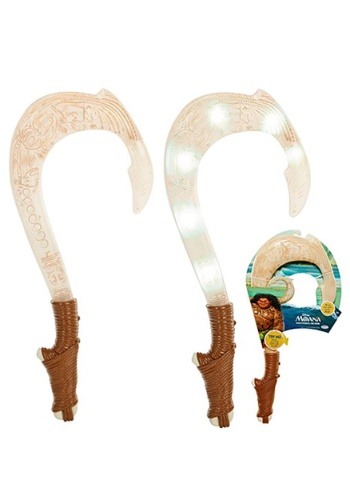 With the magical powers granted to him by the deities of nature and the sea, Maui pretty much helped to create the world we know.  Fetching some sunlight?  Dragging up the land from the depths?  Those aren't D-List demigod tasks!

Now, all those accomplishments are bound to go to anyone's head, so we can't judge him too harshly for being a tad full of himself.  (At least his Tattoo-Self knows better!)  But, with a focus on the right waves to ride, even Maui can become a truly full-fledged hero and help Moana restore the balance of nature to the world!

Of course, it is hard to be of any help if you can't pull of the magic!  Fortunately, you won't have to travel to the depths of the sea and fight a crabby demon to get this Magical Fish Hook used by Maui in Moana!  Wave this wondrous gift of the gods and watch the lights flare and hear the sounds of magic running through it.  Next step:  your own island paradise!

When you get your hands on your Maui's Fish Hook, you're going to want to jump right into the big stuff.  Shapeshifting, flight, one-on-one combat with a lava goddess.  But, pace yourself.  Just practice making it light up and issue magical sounds, first.  Then you can start working on the rest of your divine powers!