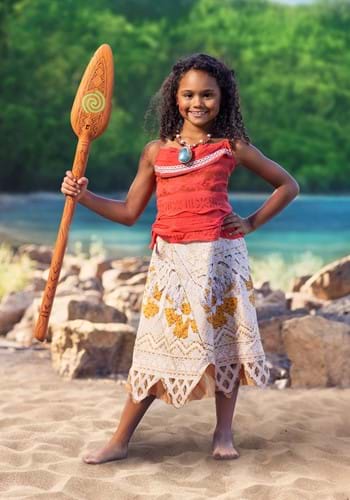 Well, it seems to be your lucky day!

The strangest thing happened at the office today. Tamatoa (yes, that crab) came crawling in (totally unexpected) to check on an order. Of course, he was sporting his shiny golden shell and looked very smug and pompous. He's very proud of his wealth and loves flaunting it as much as possible, you know, since he's not a "drab little crab anymore." Anyway, he came in requesting to pick up his package early and he managed to find an opportunity to break out in song (surprise, surprise). Before Tamatao tiptoed out with his package fixed neatly on top of his shiny shell, he dropped one of his treasures: this Disney Moana classic girls costume.

We thought about looking up the coconut crab's contact information and sending the costume back to him, but then we thought your daughter would get more use out of it. If your little girl has been asking for the perfect Moana costume, then it's your lucky day because now you can give her this one!

This officially licensed Disney costume is a dress modeled after Moana's attire, featuring clear elastic shoulder straps, a tribal print orange bodice and a long skirt. This may look like two different garments but it's really one piece!

Give it to your child because we know that she'll love wearing it around the house while singing, "How Far I'll Go" and if Tamatao comes back in looking for it, don't worry. We'll just tell him that we accidentally gave it to the Kakamora!