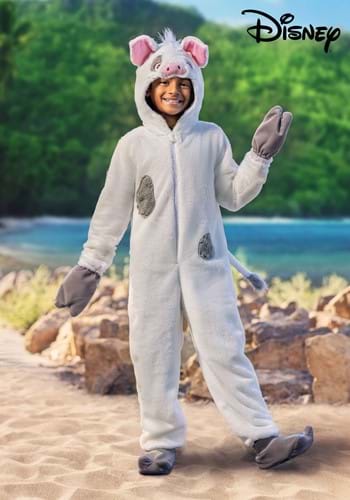 You were quickly on board when your youngest asked to be Disney’s Moana for Halloween. The whole idea of Halloween had been making her nervous. Trick-or-treating at night sounded dangerous—who knew what monsters might be wading in the dark.

But she'd fallen for the brave wayfinder in no time and was ready for her first big adventure, too! At least enough that she was a bit more excited about heading into a chilly October night to collect her treasure. You could tell she still had nerves to calm. Luckily, your eldest child had been there before, and he stepped in with a brilliant plan. What better to accompany a brave wayfinder than her perfect piggy pal!?

Help your kind kiddo get dressed for Halloween with our exclusive Disney Pua Children's Costume from Disney’s Moana. The officially licensed ensemble transforms the wearer into the cuddliest companion with just three pieces. A white hooded jumpsuit starts the costume. Made from a super-soft material with appliqued spots like Pua's and an attached tail, your child need only secure the front zipper to take on Pua's precious appearance.

Of course, guaranteeing your child looks like the Disney darling and not just any old pig, the attached hood features Pua's big ears, bright pink snout, and small but bright brown eyes. The costume is completed with pairs of mittens and shoe-covers shaped like hooves, ensuring your little one is ready to march alongside Moana.