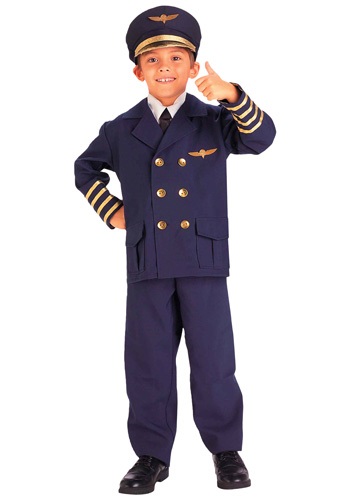 "Ladies and gentlemen, this is your captain speaking. Please prepare for departure."

Have your little commercial airline pilot memorize that line. Because, trust us, he'll be saying it all Halloween night to his passengers and flight attendants when he suits up in the Child Airline Pilot Costume! It's the ideal getup for the aspiring aviator who has just a little bit more flash than all the other flyers in the neighborhood. You know the type... because it describes your kid to a tee! He's destined for big things, and there may be nothing bigger than a commercial airline captain. That's why he and this suit were made for each other!

Say what you will about the modern flying experience (we miss the days of Pan Am... sigh), everyone loves a pilot. They still hold a mystique, and a larger-than-life charisma that still captures our imaginations. Basically, no one's cooler than an airline pilot. Who wouldn't want to be one? Your pilot will join the ranks of these almost mythical heroes when he dons this distinguished suit and cap! Best of all, it's comfortable and easy to get into. He'll have that professional suit-and-tie look, but you won't have to spend money on necktie lessons (we're pretty sure those are a thing)... because this tie is elastic and stretches into place easily!

The suit's also got the stately, official "duty uniform" look that makes an airline captain instantly recognizable, including the gold service stripes on the sleeve, and the gold buttons on a double-breasted jacket. It's the slickest way to fly... and when your kid puts on the Child Airline Pilot Costume, the sky's the limit!