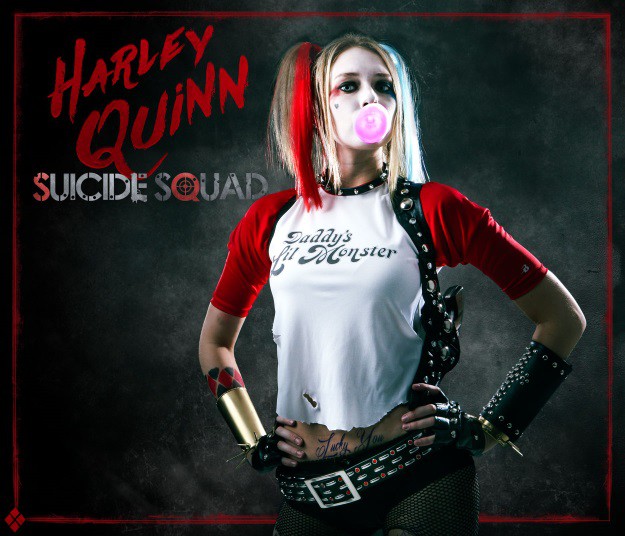 For a movie that doesn't come out for over a year, Suicide Squad has sure been finding its way into internet headlines an awful lot lately! One day it was a short clip of the Batmobile screeching through closed off Canadian streets, another day it was a paparazzi pic of Jared Leto sipping a latte between takes as The Joker, and on even an additional day, one glorious day, it was an album of on-set images featuring Margot Robbie in FULL ON Harley Quinn mode.

We couldn't be more obsessed with the "really modern, yet still classic, very intimidating, and obviously super sexy" new take on Harley Quinn's look, and as hard as that may have been to follow, we're sure we're not alone in singing its praises! SO: do you want to try this look for yourself? Do you want to dress like Suicide Squad Harley for Halloween 2015? Do you just want to pass the time until Suicide Squad's release next summer by reading about anything loosely related to Batman? Then read on for a complete sexy Harley Quinn cosplay guide and makeup tutorial! 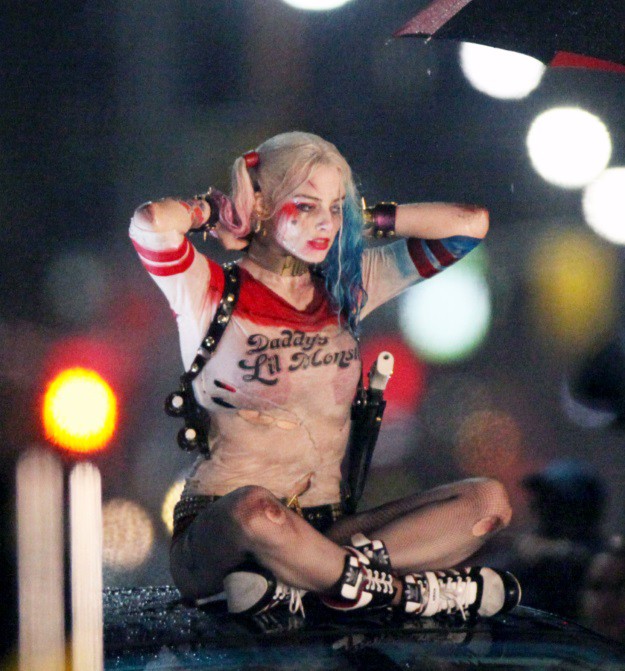 How gritty! How colorful! How unique! This look has so many visual details and appealing accessories that we simply couldn't resist making a Cosplay DIY for the dastardly Miss Quinzel. 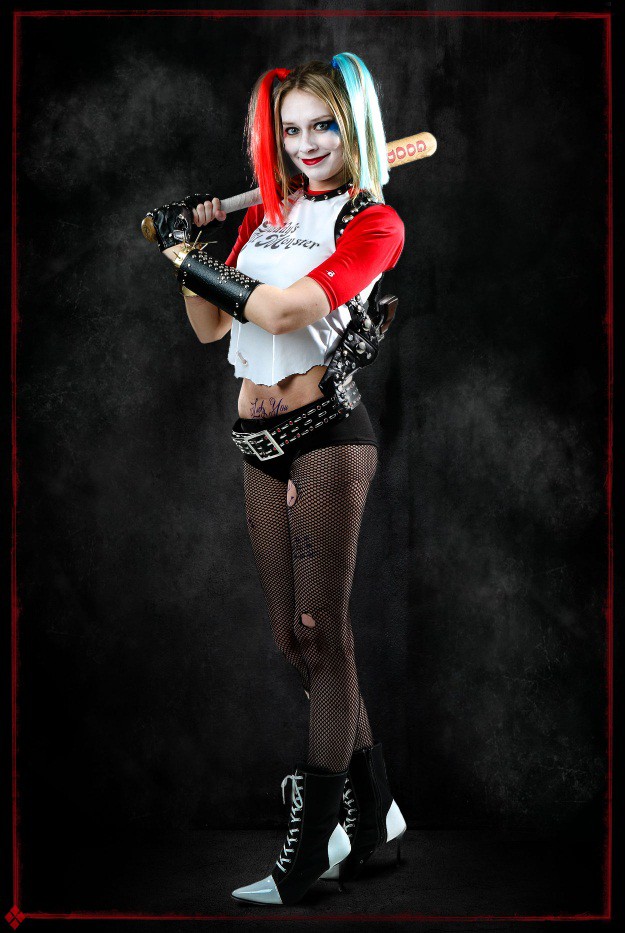 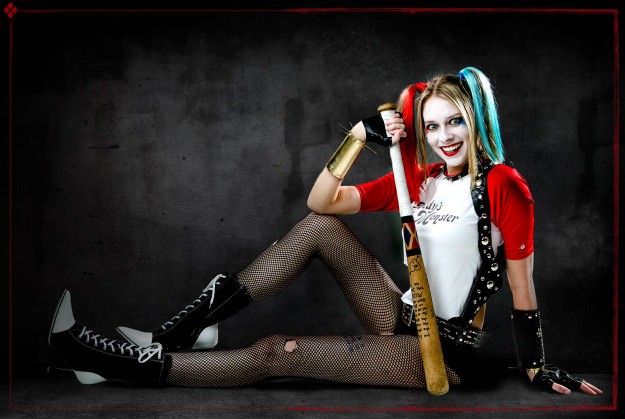 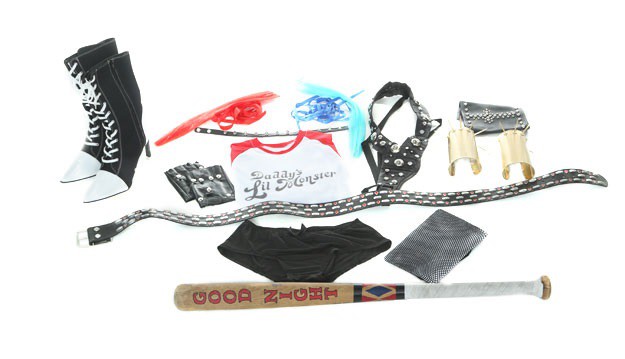 Here are all of the goodies we used to assemble our DIY Harley, save for the signature makeup! 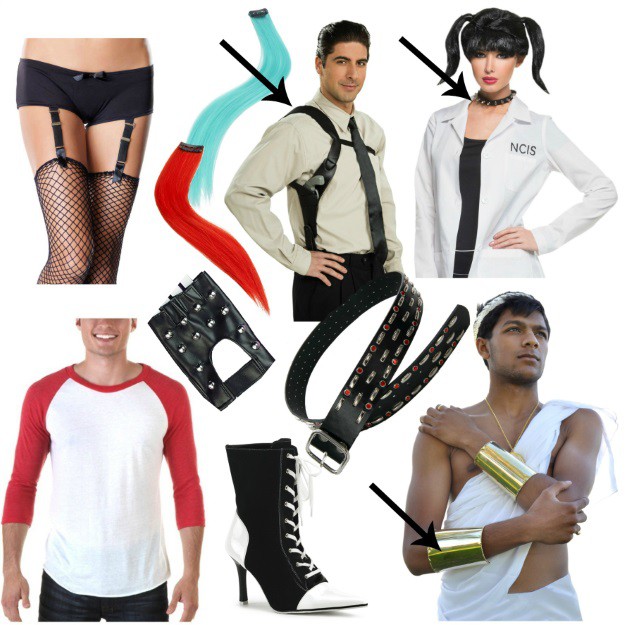 Those are the basic elements you'll need for your DIY Harley Quinn costume! We used a custom design to print our own "Daddy's Lil Monster" shirt. You could easily achieve a similar effect with Sharpies or fabric markers. The high heel boots, leather belt, hair extensions, fingerless glove, and studded choker, were ready to go straight out of the packaging, but the other items needed some roughing up: 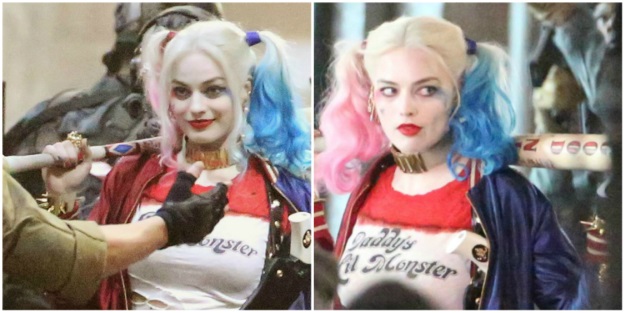 Sometimes Harley has a mallet, (find DIY details to make your own mallet), but in Suicide Squad, she's going "batty!" (Yasss worked in a pun.) A costume without accessories is greater than or equal to 50% less fun, so fashion yourself a bat! We now offer a licensed "Goog Night" bat, but if you're feeling crafty, here's what you'll need to make our version: 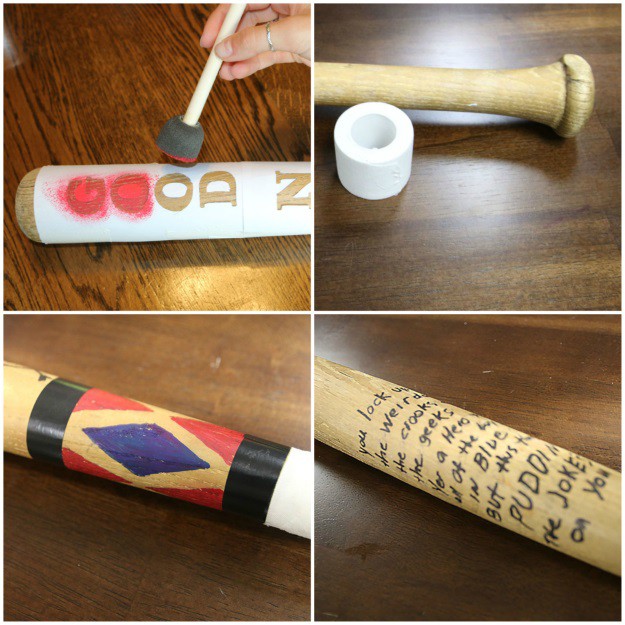 This craft is quite straightforward once you have gathered the supplies. Sponge brush the red paint over "GOOD NIGHT" letter stencils, create a diamond pattern with Sharpies, section off the handle portion with athletic tape, and scrawl your favorite Harley Quinn quote in black Sharpie at the top! This is what we went with:

You lock up the weirdos, the crooks and the geeks!
Yer a hero to all of the boys in blue -
But this time, PUDDIN, the joke's on YOU!

In many of the Margot Robbie set photos, we see that her Harley is wearing one golden, spiked wrist cuff. Now isn't the time to take a shortcut on details, so grab a cuff, some sandpaper, some nails, and a hammer, and get to crafting! 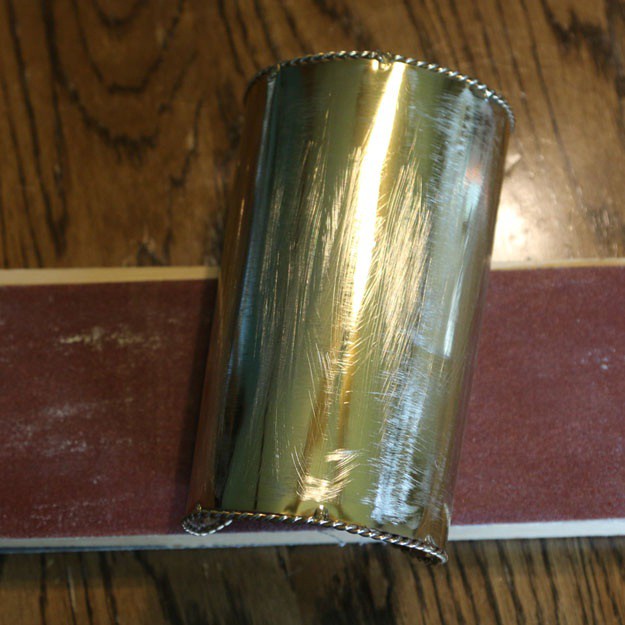 To take the pristine gold finish off of our Roman Wrist Cuff, simply rub the cuff with gritty sandpaper! 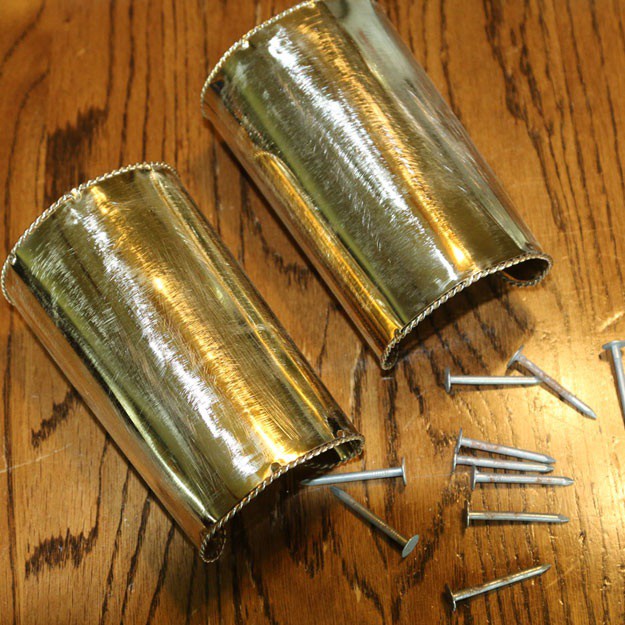 The final step is creepy but easy. Poke nails through the cuff and secure the nail heads on the inside with a hot glue gun. The cuff material isn't thick, so you should be able to poke the nails through by hand like we did!

This is another awesome and quick DIY that will really bring your Harley Quinn Suicide Squad look to the next level! We simply cut off the cross-body strap from our "Gangster Gun Holster," and liberally attached a pack of multi-sized silver studs. 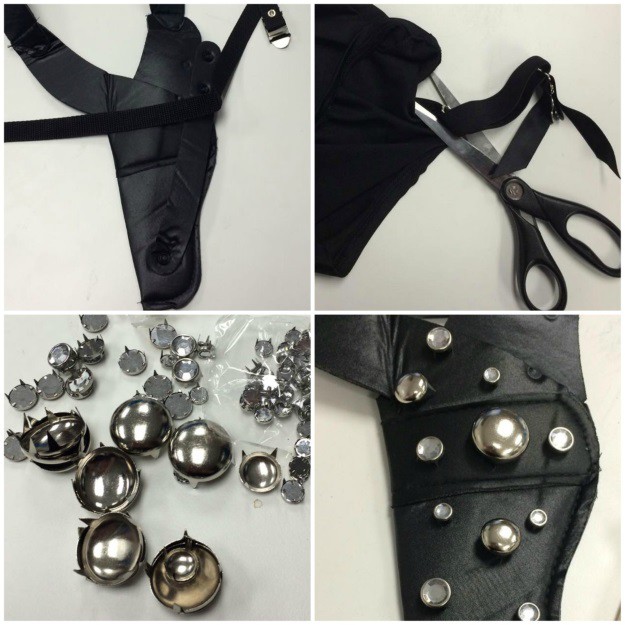 Did you know that you can buy temporary tattoo paper at most craft stores? You just print whatever image you like onto that tattoo paper using a standard printer, and seriously, it becomes a temporary tattoo! Did your world just change? Take a breath. Grab some water. Then come back and keep reading. We created the custom sheet of tattoos below, which you are welcome to use for your Harley Quinn tattoo: 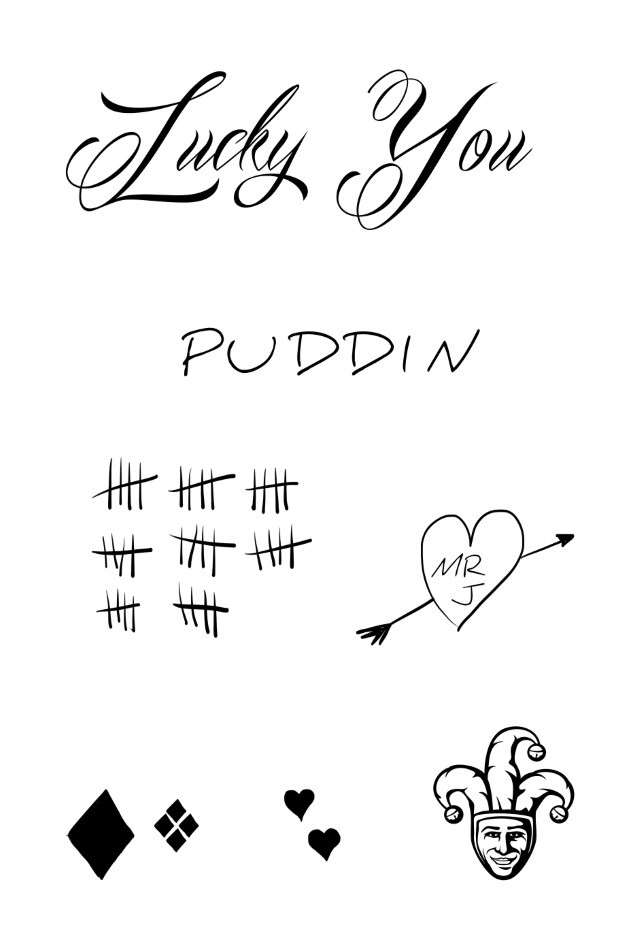 These are SO much better than the tattoos on the inside of Fruit Stripe gum!! 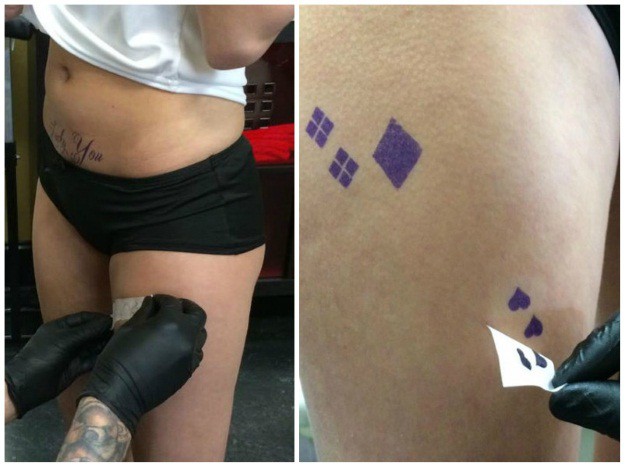 Our tattoo applier has actual tattoos, but remember, this Harley ink is temporary. If you DO decide to use our printable designs as inspiration for a permanent tatt, DO send us photos!

Your costume is assembled, your accessories are DIY'd, you have clipped hair extensions into your pigtails, and you've practiced your best New York accent. What's left? The makeup! Take a look at our helpful Harley Quinn face paint tutorial below. 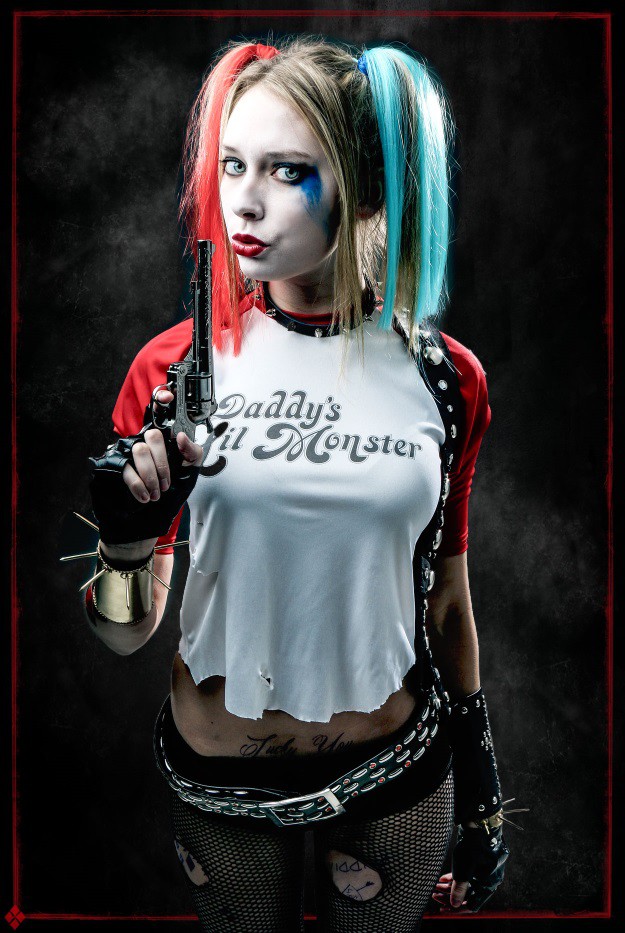 Well, even after that complete costume and makeup guide, you've still got more than twelve months to wait until Suicide Squad is released in theaters. Better pass some more time by exploring all of our Harley Quinn costumes and accessories! "Wheee! Look at the pretties!"