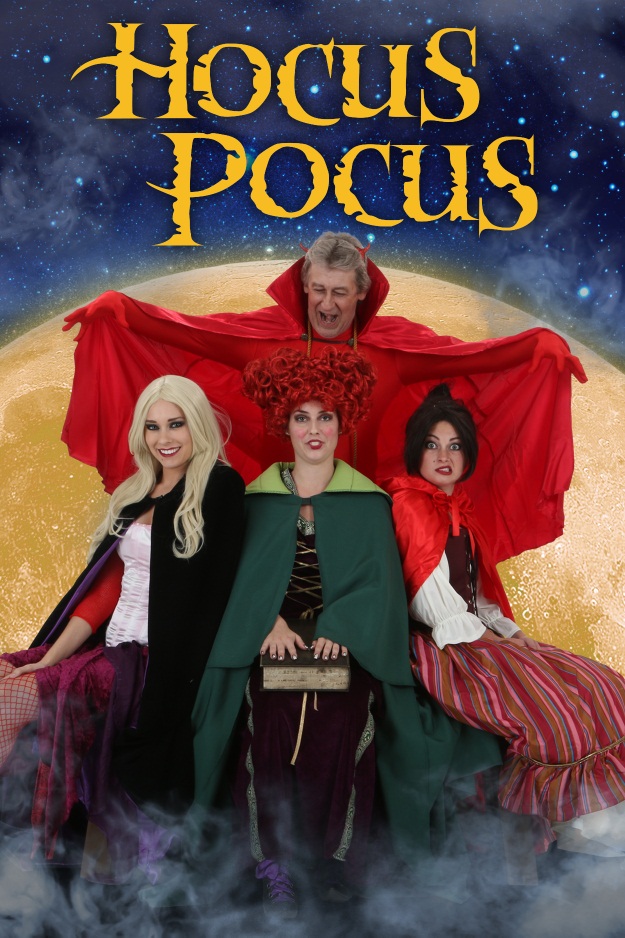 In 1993, just over 20 years ago, Disney released a Halloween-centric kid-friendly "horror" movie. Hocus Pocus quickly became a cult classic, Halloween viewing staple, and cautionary tale to virgins the world o'er! Luckily YOU don't need to wait 300 years for a virgin to light the black flame under a full moon on All Hallows' Eve - you can bring the Sanderson sisters to life with some easy DIY skills. If you have a larger group than three, there are plenty of memorable supporting characters you can include in your group Hocus Pocus costume. Enjoy the images! We think they're as spellbinding as this classic film. 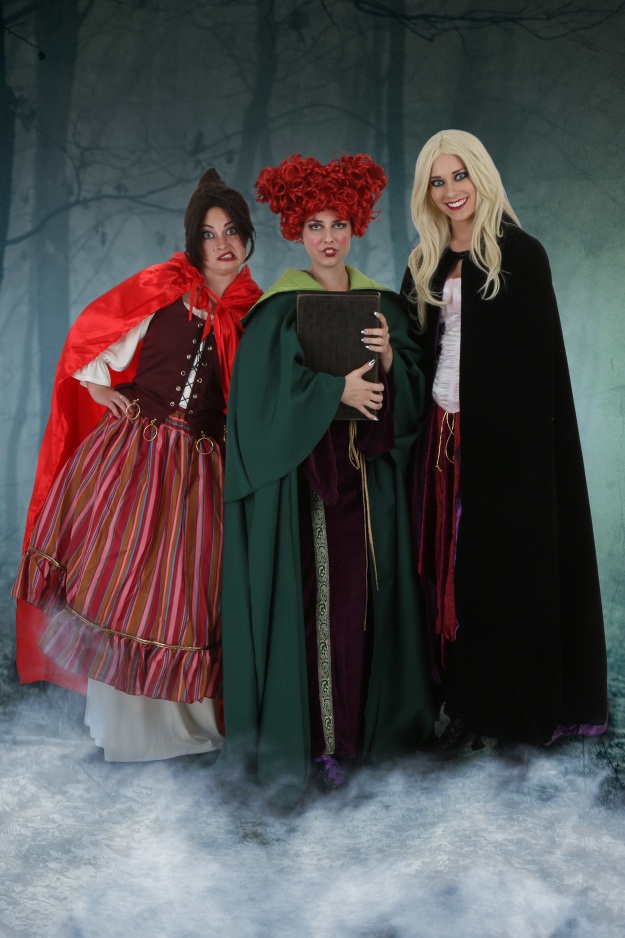 Watching the Sanderson sisters characters be reintroduced to the world after nearly 300 years made for some of the funniest moments in the movie. 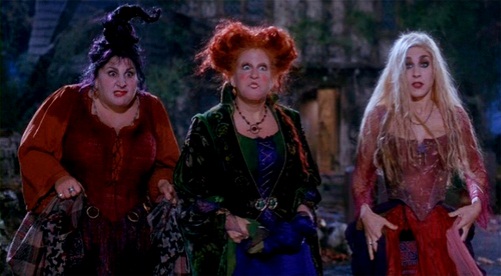 Be sure to screech, scream, and shriek at any new technology that crosses your path!

Winifred was the leader of the sisters three. Her most treasured possession was her googly-one-eyed spellbook, followed closely only by her lust for eternal youth. When you don your Winnie costume be sure to carry around an old book and have a permanent look of displeasure on your face for the full effect! 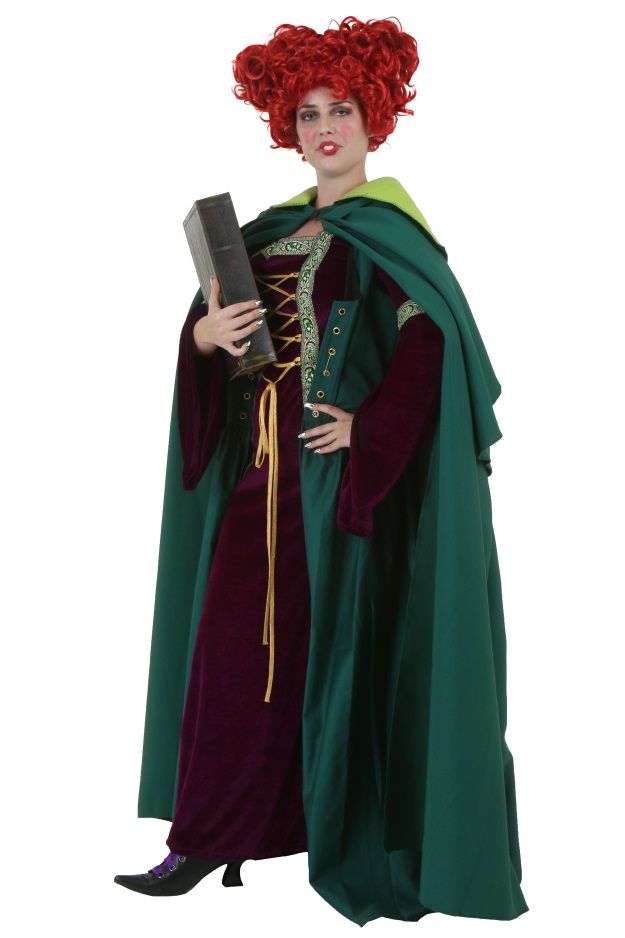 Rich gem tones like amethyst and emerald are perfect for Winnie's style. For the hair, we used our Red Queen wig, which makes for the perfect Winifred Sanderson wig. We used this purple gown with gold and green trim as the base of the costume. We layered a long corseted green peasant dress on top and used the cape from our Emerald City Guard costume. Grab yourself a pair of buck teeth, Hocus Pocus shoes, and some long fake nails to complete the look. Just promise us that you'll try to avoid the urge to hunt down little children! 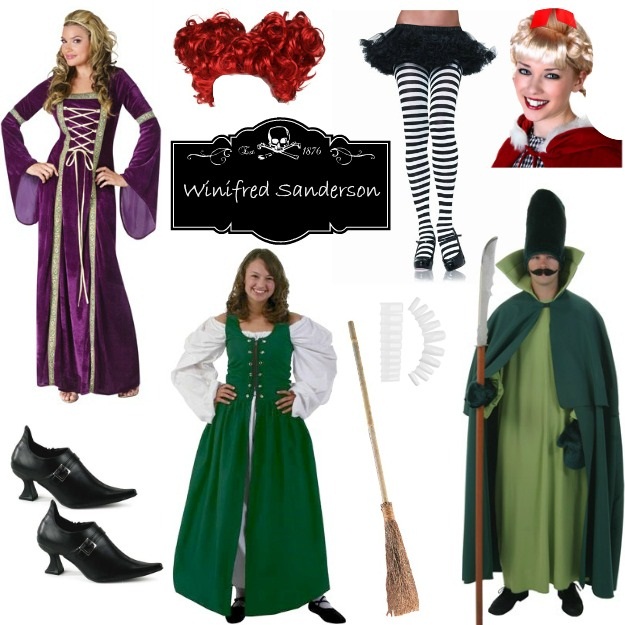 With a nose like a bloodhound (and often a growling bark like one, too) Mary was the goofy one of the bunch. Although her talent for sniffing out children was impeccable, she was often on the receiving end of Winifred's frustrations. 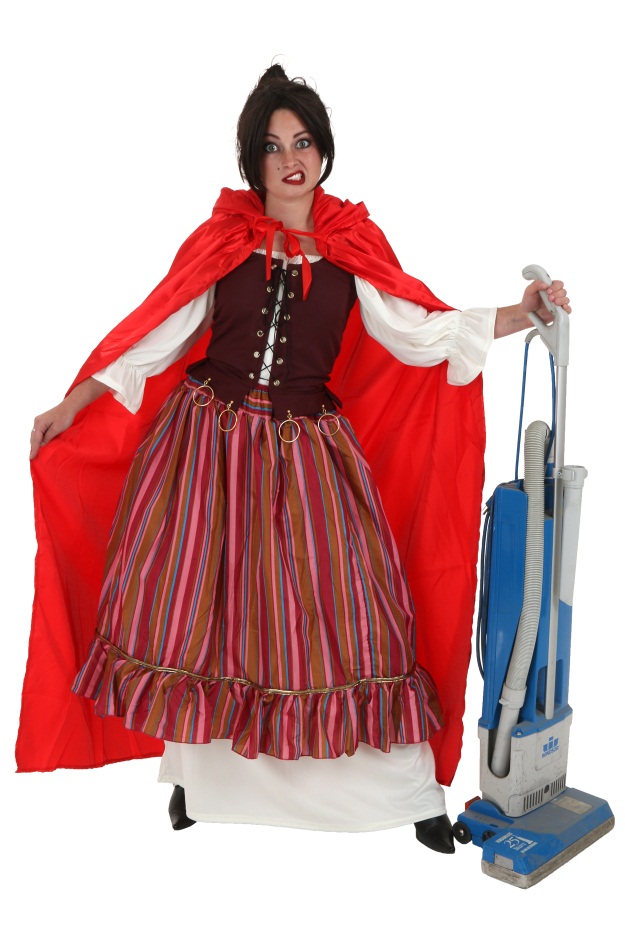 For Mary's costume, we started with a fortune teller dress and added a red corseted vest with gold hoops along the trim. To create Mary's unmistakable hairstyle, wrap your hair around a craft cone and secure with bobby pins. If your hair isn't long enough, a styleable fashion wig will do the trick! Psst....don't forget your vacuum! 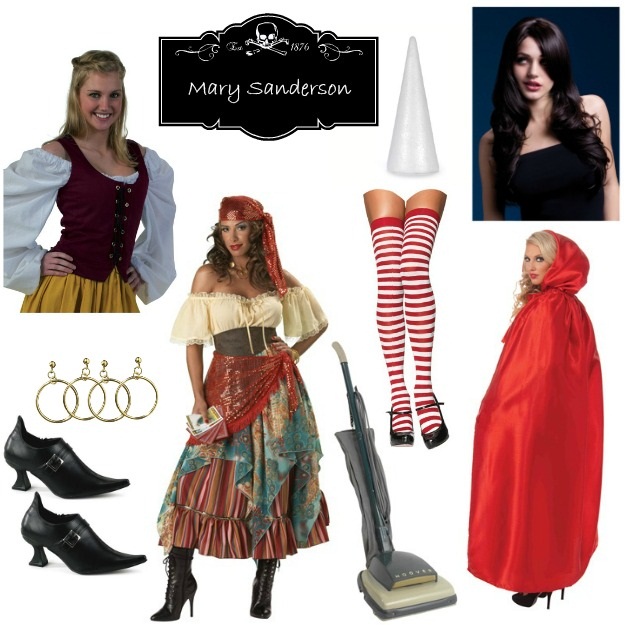 Beautiful and naive, Sarah is the seductress of the sisters. Her charming voice casts a magical spell over all little children within ears' reach, beconning them to come to her. Memorizing her enchanting lyrics will surely have you creating your own admirers - look out! 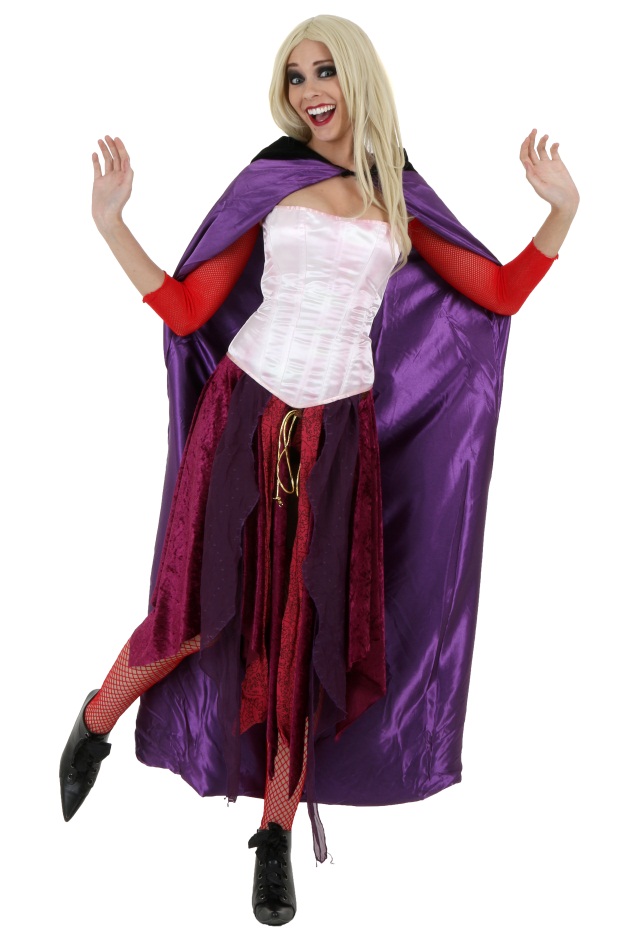 To recreate Sarah's look we used her signature colors of varying shades of purple and red. Beginning with a white corset we used a natural vegetable dye to create a pretty blush color with beetroots. Add sashes and drapey fabrics under the corset to create the shifty flow of Sarah's skirt. Lastly, cut off the ends of a pair of red fishnet stockings to create sleeves. 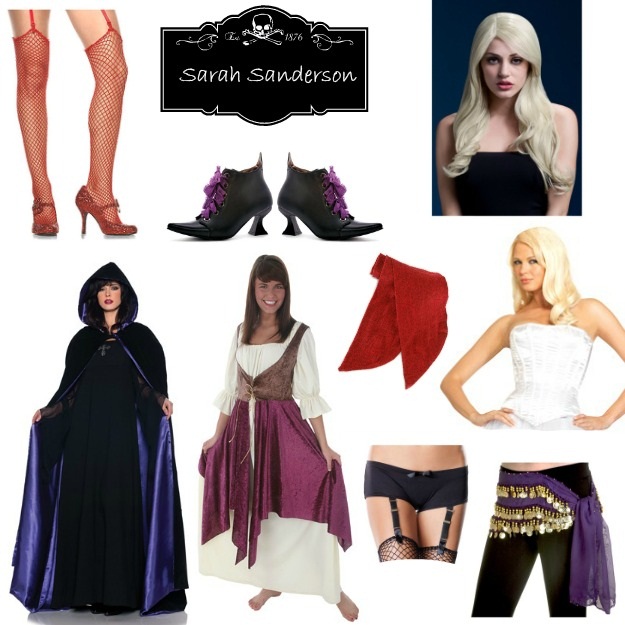 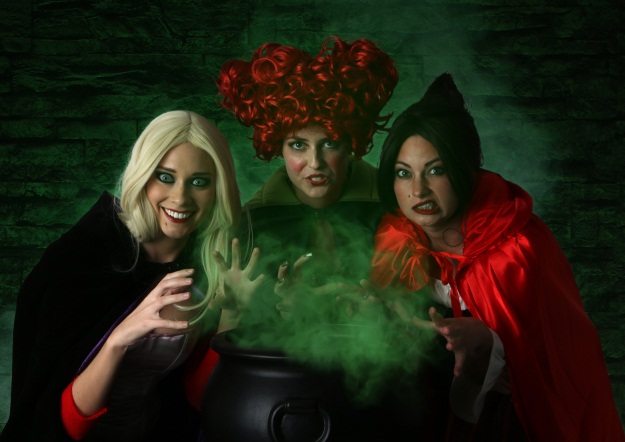 Back for one night only, the sisters must recreate their potion for eternal life and suck all the life force from Salem's unwitting children. We consulted Winifred's spell book and discovered her secret recipe for everlasting youth - sans the dead man's toe! You may want to carry some extra elixir around with you in a small potion jar, just in case you need a little pick-me-up from the nearest child. 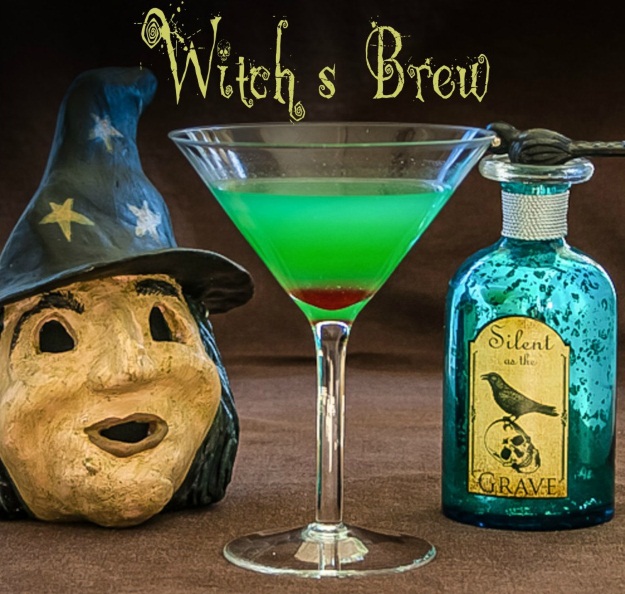 Pour over ice, shake well in a martini shaker, pour and enjoy! (Just to be clear: do not give adult beverages to children - no matter how enchanting their life force may be!) 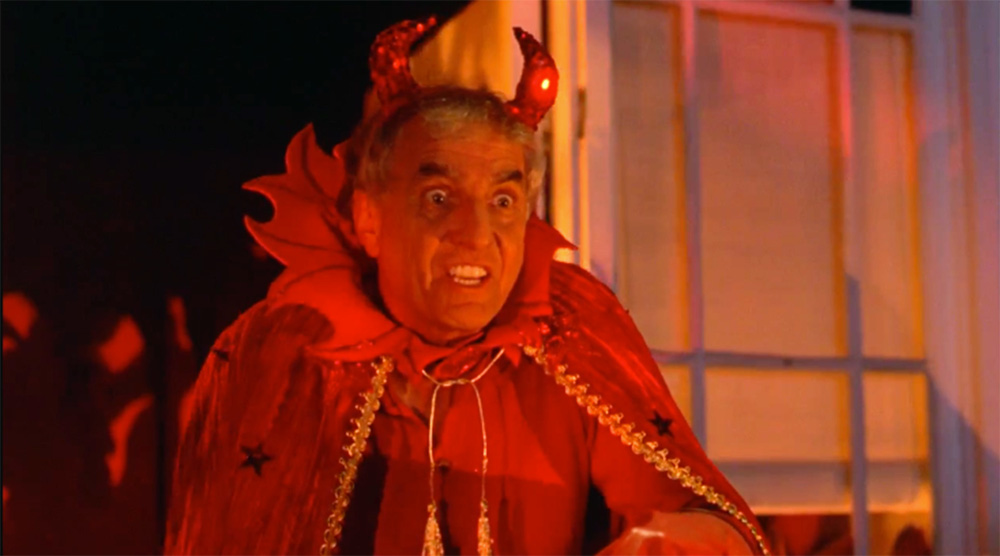 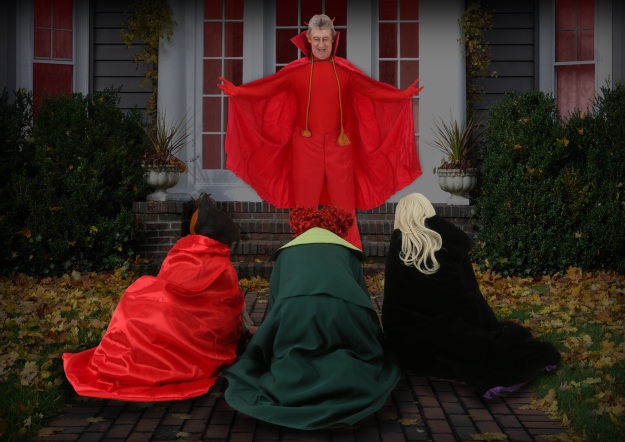 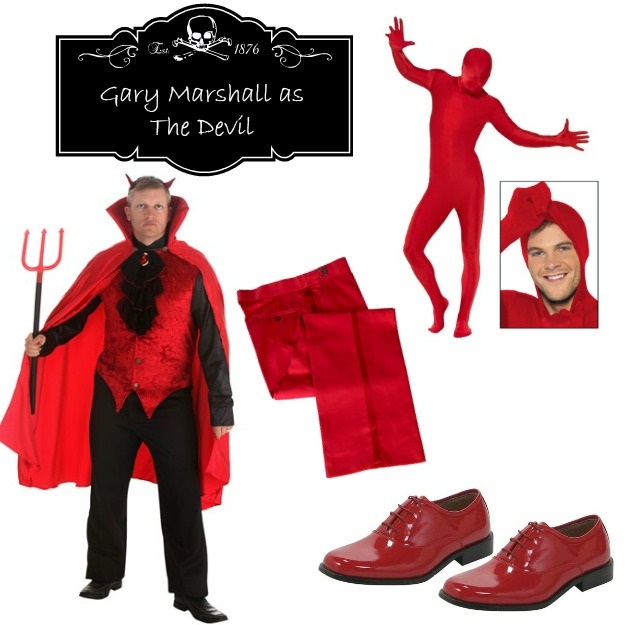 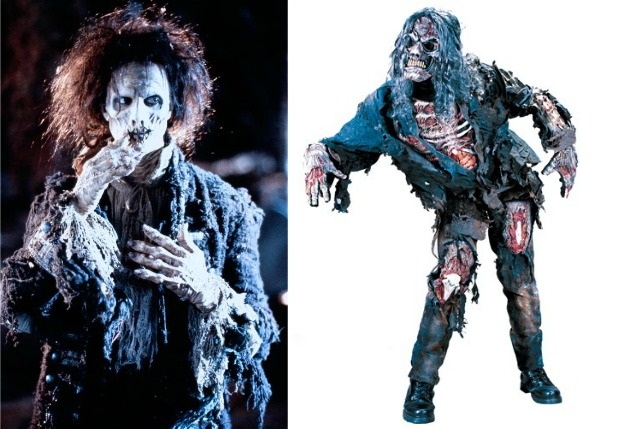 Poor Billy was so misunderstood - literally. His mouth was sewn shut by Winnie after she discovered he cheated on her with her sister Sarah. What's a broken-hearted girl to do? Simply use some black yarn and stitch the mouth shut on the mask for a quick and easy DIY Billy Costume. 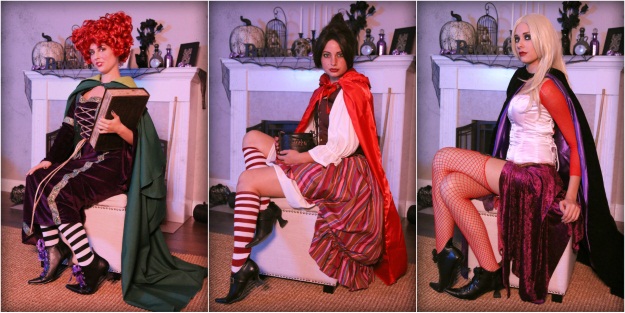 What's a good cosplay without a little sex appeal? If you are looking to sass your Sanderson sisters costumes up a bit, simply shorten the skirts and show off some sexy stockings!