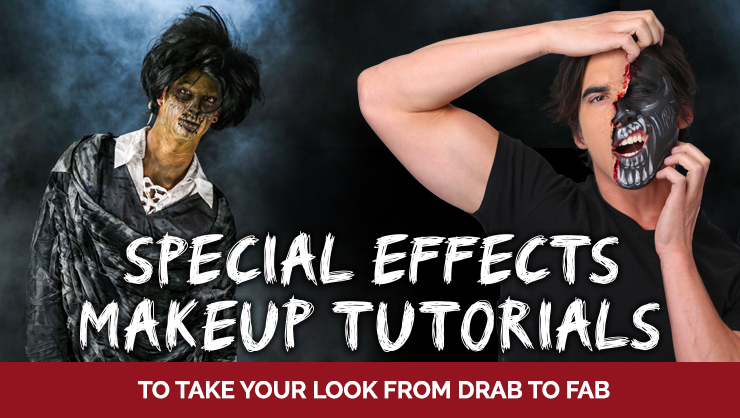 If there's anything we love more than scary costumes, it would be scary Halloween makeup to match! Special effects makeup is a great addition to a plethora of costumes, so we gathered a few makeup tutorials to show you how to do your own blood and special effects makeup! In this makeup tutorial video roundup, we included videos for zombie makeup, vampire makeup, witch makeup and werewolf makeup as well as plenty of gory goodness. We can help you scare because we care!

"He could not tell her secrets even in death!"

This video will show you makeup techniques so that yo u can look like Billy Butcherson from Disney's Hocus Pocus. Even if you aren't cosplaying as Billy, you can still use these special effects makeup techniques to make an equally convincing zombie makeup look. (He comes back from the dead so he's basically a zombie, right?) Check out these zombie costumes if you're looking for something to go with some zombie sfx makeup!

The first step is to apply spirit gum to the eyebrows. Use the end of your makeup brush to press the hair down. Once the hair is completely affixed to the face, apply latex adhesive to the brows and cheekbones. Then,apply molding wax directly to the adhesive. Mold the wax around the brow and high points of the cheeks. be sure to take the time to mold it into the right shape, but it doesn't have to be perfect because he is a zombie. Then, use moisturizer and a small spatula to press the edges down. This will help the wax work better for you.

Apply latex over the molding wax to fix any edges that are sticking up. Next, apply liquid collagen in a downward line along the cheeks and chin to create the effect of drooping skin. You'll have a bit of a wait at this point, since the liquid collagen takes some time to dry.

Once the liquid collagen is dry, apply liquid latex over the entire face. Next, use a dingy yellow-color paint over the whole face. We combined the yellow and brown with a little green to get the shade that we liked. Now, add more green, black and brown around the eyes.

Now, to add the stitches. Using spirit gum, add dots aroundthe mouth. Tap each dot to activate the spirit gum. Attach black string to each one to make it look like a sewn-up mouth. Finally, the wig. And, Billy has risen from the grave!

The veins will make you look like a vampire that's extra hangry. [source: Giulianna Maria]

This makeup tutorial from Giulianna Maria is great because it's actually scary, as opposed to the plethora of sexy vampire makeup looks that are incredibly plentiful and easy to find. With perhaps a little less emphasis on the eye makeup, this tutorial is also great for guys willing to do a little makeup too! Vampire costumes are very popular costumes for Halloween, so set yourself apart from the rest by complimenting your costume with some great vampire makeup!

With witch makeup this creepy, you may want to distress your costume to match your makeup. [source: RawBeautyKristi]

Learn how to look scorched and sooty all at the same time! Colored contact lenses make this feel even creepier. Pair this with a disheveled looking witch costume so you can "double, double toil and trouble; fire burn and cauldron bubble"!

This werewolf makeup tutorial by Bella Makeup on YouTube does a great job of mixing glam and gore elements together for a seamless werewolf transition. We love the feathered makeup technique she used to help make her eyebrows and hairline appear furry! (It's certainly a better alternative to attaching faux fur to your face with spirit gum!) Many werewolf costumes come with a hood or mask, but if you know that you or your child isn't fond of wearing masks, makeup is a great alternative! (You also won't get stuck carrying their mask when they decide to ditch it after three blocks.)

Get ready to use some fun makeup products! Glow-in-the-dark makeup is fun if you have a good costume to match. [source: Alexa Poletti]

While this isn't a movie-accurate Corpse Bride makeup tutorial, you will learn different techniques to effectively use makeup face paints. The advice given by Alexa can be applied to other paint-heavy costumes like Day of the Dead costumes, skeletons and clowns.

Two faces are better than one.

Watch this video to see how to create a ripped face look. Not only is this good Alien makeup, but it could also work for zombies and other strange and grotesque creatures with peeling skin.

Now, we are going to sketch out the parts of the face where we are going to have the four rows of teeth, not two rows but four, because this is alien. My pencil broke, so I had to go get someone to get me a sharpener. So, in the meantime, since the liquid latex had dried, I an putting foundation over top so it looks like his regular skin. Make sure that you blend in the foundation with both the face and your neck, so that way it doesn't look uneven. Now, I'm going to go back with that eyeliner pencil. You can use any kind of color. I just prefer black since we are using mostly black face paint for this.

Now, I'm going over the layer of liquid foundation with a powder to make sure that it sets. Now, what we're going to do is we're going to peel back some of that liquid latex so that it looks like it is peeling off of the skin. Make sure that you are very careful with this, and don't rip the liquid latex, because it is very easy to do that. This is just to give the effect that your skin is peeling off of the alien that is coming out from underneath.

And now, what I'm doing is I'm going back in the places that I highlighted with white, and I'm patting it down so that way it blends in with the black. And then, going back with another white line over your grayish line to give it some of that highlight. We're going to use white in the small part of where his open jaw is, so that we can see...they aren't teeth, but they are somewhat veiny between those parts, so you want to make sure that you really get those pieces.

I tried to see if a black and red would look good underneath this, but I know that Alien just has a straight-up black mouth, so just go in with black water paints. Now, we're going to clean up the teeth. It's okay if you got a little messed up the first time, because now we're going over it with a small detail brush, and cleaning up those spots where the teeth had gotten messed up. Then, you're going to go back with the white, and define more of the teeth if need be, and put in some more highlight over top of the teeth, so that way, people know that they are there.

Now, we're going to go into the jawline, and make sure that people can see the definition between the jawline of both sets of teeth, and the shell up over top. Now, I'm going in with some black eyeshadow, and I'm going to just smudge a little bit over the teeth to make them look aged. Then, I'm going in with a brown eyeshadow to make more of the definition within. Also, you can use it on the teeth to make them look a little bit more aged.

Now, I'm going over the liquid latex layer that is between the alien, and using red shadow and black shadow to really mess it up. And now, I'm going in with some scab blood, and liquid blood to make it as if the liquid latex is coming off of the alien. And then, after adding a few finishing touches with some black eyeliner, and now you're all set.

This gore makeup tutorial video is such a wonderful mash-up of gory goodness like the Glasgow smile, a slashed throat, ripped faces and more! You can certainly do a lot with some liquid latex and tissues. There are plenty of scary costumes you can pair with these special effects makeup looks, such as scary clown costumes. No one wants to meet someone in a clown costume with a Glasgow smile. "Now I'm always smiling!" These basic makeup kits are perfect if you just need a little makeup to do some simple looks. They include all the colors you need to achieve a specific look, from clowns and cats to mythical Medusa! Another type of special effect makeup you can use for Halloween looks involves prosthetics. These packs come with an application transfer that you adhere to yourself with spirit gum, and even a few temporary tattoos—they definitely save a lot of time in the makeup chair! A tip is to still add skin-tone makeup around the edges of the prosthetics so they look more realistic.

If you're looking for a higher-end makeup kit, some of our favorites are by Mehron. They come with all the makeup and extras you need, as well as step-by-step instructions so your makeup comes out top-notch! Mehron makeup kits usually align with a theme such as their clown and werewolf sets, but you can also find face painting and bald cap kits for other kinds of appearances.

With so many tantalizingly terrifying makeup tutorials available, we certainly hope you try some of these makeup tutorials for Halloween! With so many types of special effects makeup supplies available, these videos will help you figure out what supplies you will need in order to get started. Have you ever done any special effects makeup before? Are there any theater makeup techniques you're looking to try? Please feel free to share your experiences and wishes with us in the comments! We're always on the lookout for cool new makeup techniques too!