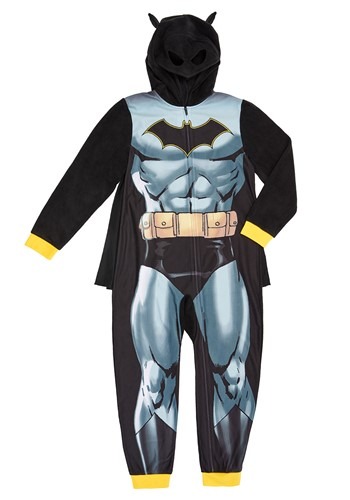 When do you think Batman sleeps? He has to sleep sometime, right? After all, he doesn't have any superpowers, so he must make time for a nap here and there. We think that he has a special Bat-suit, designed for dual purposes! You know, a Bat-suit that's suitable for fighting crime, or for taking a quick snooze. He makes all sorts of other gadgets (including Shark Repellent Bat Spray), so we wouldn't be too surprised if he had one

This Batman Hooded Union Suit for kids is also a dual purpose outfit for your young superhero-in-training! It can be used by any young Batman fan as a costume for their next costume party, or as a comfy pair of pajamas to wear for a quick, afternoon nap!

This Batman Union Suit Costume for kids is a comfy way for your little one to cosplay as Batman! It's officially licensed from the DC superhero and consists of a full-body jumpsuit made out of a soft, comfy fabric that's both warm and cozy. A zipper down the front makes it easy to change into and it even has an attached hood on top with bat ears on the side. The front of the suit has Batman's suit printed on it, complete with his muscles and the Bat-symbol on the chest. It even has a printed utility belt around the waist! When your child takes a nap, they'll feel just like a superhero!

Of course, the best part about this union suit has to be its versatility! Once your child is done wearing it as a Batman costume, they start wearing it as a pair of pajamas for bedtime. You'll have a bonafide superhero sleeping at your home once you dress your child up in this bedtime outfit!