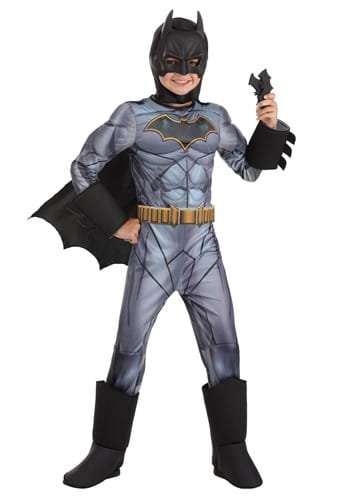 Of all the animals in the world that would make a cool and intimidating theme for a costume, why bats? Bats are tiny, mostly innocent little fuzzballs. They just flit around and eat bugs all night, and they don’t even do anything extremely cool. Well, echolocation is pretty neat, but still... There are so many better options!

Then again, maybe it is less about intimidating the opposition by means of the fearsome bat and more about coming off as less than scary. Maybe he intentionally chose a weak and small animal so that the Joker and Penguin would not think that he was some huge threat! That would explain why their plans are always so sinisterly banal, and why they can’t seem to conquer even one little town protected by a measly (but very cool) bat.

This DC Comics Batman Deluxe Kids Costume has all the bells and whistles that would make Batman himself proud to wear it! The jumpsuit zips in the back and has built-in foam muscles to make you look like the Bat himself. The costume also comes with the foam-armor bracers and boots, as well as the famous and iconic foam Batarangs! The removable helmet and detachable cape add that extra level of true-to-source Bat-style that will make you feel like the caped crusader himself!

If you are looking for the perfect modern Batman costume for your child this year, then this is the one for you! They will love hurtling around fighting crime as the coolest superhero billionaire philanthropist there is!