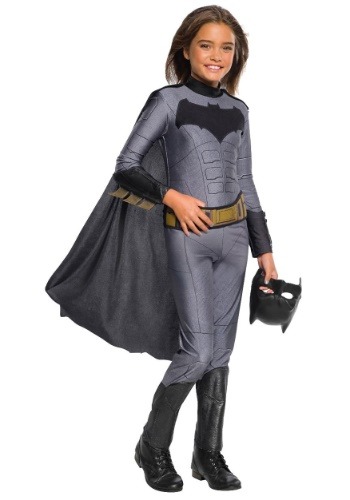 Batman's seemingly always on duty in Gotham City, but, we just got a note from the Batcave saying that he's looking to take a little break. Just a little hiatus! We're not sure if he's itching to finally take a vacation with Catwoman or if he's just trying to swing a little staycation to binge watch his favorite shows, but either way, we don't mind. Because we're sure there's someone who's ready to step up and be Batman!

Know someone in your household? Any guy or gal will do, but we think it's about time for a girl Batman and we've got a costume that's designed just for little ladies to step into the role. Yes, Batgirl is great, too, but we need someone to fill the boots of the original Batman for a while. So, let's get her suited up!

This Batman Girl's Jumpsuit is DC Comics officially licensed. It's designed as a costume jumpsuit and comes with a belt, mask, and cape. The jumpsuit has plenty of details, including the Bat Shield on the chest, molded gauntlets with fins, and attached shin guards. The cape secures to the jumpsuit with hook and loop fastener strips, and the mask secures around her face with an elastic band. All done up, her identity is sure to be safe and secure, since no one will probably even notice that she's not the regular Batman!

Crime fighting and savin' the day

When the crime fighting and savin' the day is all done, she'll be able to go home, hang up the suit, and know that she did a good job. And, hey, even if the mission is just safely securing a stash of trick-or-treat candy, there's nothing wrong with that! Whatever kind of mission she'd like to undertake as Batman, with this costume, she'll be ready for the action!