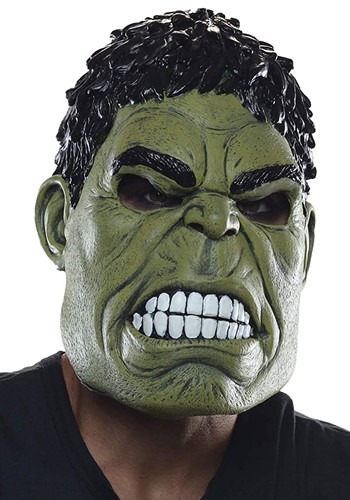 The Best of Both Worlds

It may have taken 18 months of toiling and tinkering in the Gamma Lab, but it was all worth it. Bruce Banner was finally able to connect with his inner self, the Incredible Hulk. Instead of fighting the Hulk like he was the disease, Banner began to realize the Hulk was actually the cure.

Once the two old companions finally buried the hatchet, they put the brains and the brawns together. It was truly the "the best of both worlds". Now when the Avengers assemble Iron Man won’t have to worry about the Hulk smashing any of his new toys.

This deluxe mask is officially licensed by Marvel. It will be the green icing on your costume cake! The molded vinyl mask completely covers your face and has an elastic band around the back of the head to keep it firmly in place. You can see by the look in his eyes that even though Bruce and Hulk are getting along, they are always up to SMASH!

With the brains and the brawns, you will be everyone’s favorite Avenger. Whether you're looking to improve on your selfie game, figure out some quadradic equations, or do a little smashing, the Avengers: Endgame Hulk Mask is just what the doctor ordered. Well, Dr. Banner that is …