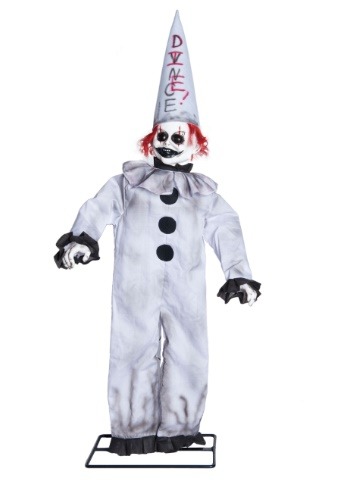 WHEN YOU THOUGHT IT SAFE TO LAUGH

The scary clown has been a mainstay for several years, maybe even decades, it seems.  But, where did all the terror over a goofy clown come from?  What turned this weird little guy who stabs at your sense of humor into one who just wants to stab!?

While clowns have been around in some form since 2500 BCE, they've mostly just been manic pranksters.  They didn't get real dark until everyone found out that Grimaldi was basically murdering himself over his clowning!  Turns out that our modern clowns have just decided to turn that around!

Find out who among your friends has a serious case of coulrophobia when this Animated Dunce Clown Decoration has a fearsome hello to shout!  This figure stands around with, well, let's just say it isn't the most trustworthy grin in the world.  The bloody features of its face certainly don't help create any creature comforts.  And, the whole disarming "Dunce" cap changes gears pretty fast when your friends see its alternate suggestion!

NOW WHERE TO HIDE HIM!?

Choosing to bring this Animated Clown home isn't going to be a tough choice at all.  Some animated terror is the perfect thing to augment your decor.  The real choice will be deciding where he's going to live.  You want a clear view but only after they notice something in the corner of their eyes!  Not recommended for the faint of heart!