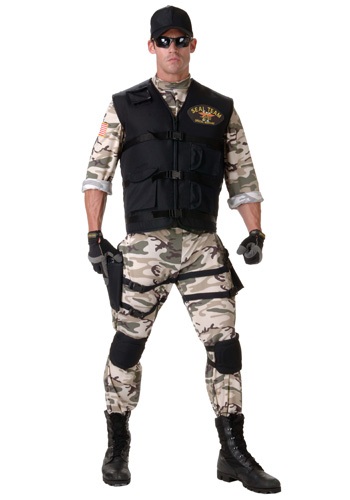 We've all seen action movies, and we all know the drill. When an international incident arises and pushes the world to the brink of war, they send in the Navy SEALs to neutralize the situation. But what happens if you dress up as one of these hardcore commandos for something a little less extreme, like a costume party? In this SEAL Team Costume, you'll be strategically equipped to find out!

By "less extreme" situations, we're talking about every day events that could use a tactical approach, like a costume party or after-work mixer you don't really want to go to. On those missions, you don't want to hang out and mingle; you want to get in, achieve your objective, and get out before anyone notices you. If any chatty friends try to engage you, you need to take cover and evade capture. This might just mean hiding behind a chair until the coast is clear, but you should also be prepared to take extreme measures, like putting a buddy in the line of conversational fire so you can make your escape! Just don't forget their sacrifice next time they need you bail them out of an awkward situation.

This military style costume will get you ready for action as soon as your boots hit the ground! (that is, as long as you add a pair of boots) The camouflage printed outfit comes with a black tactical vest with pockets for stashing your gear, and matching black knee pads and a hat, for those grueling recon missions. Suit up and remember your training, SEAL, and you will live to party another day!