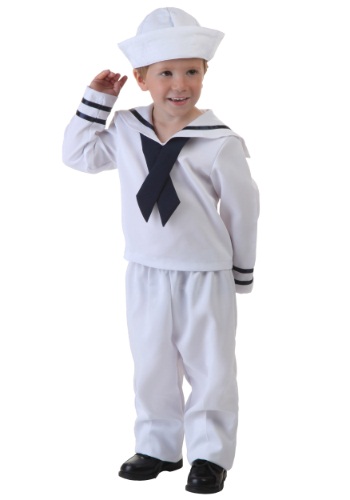 So your little guy has decided to join the Navy!

Sure, it’s a little strange for a 3 yr. old to up and say, “Hey, parents, I’m enlisting. Thanks for supporting me in my decision to serve my country” when they can’t even read yet, but your toddler has never done anything by the book. While other kids were playing with blocks, your kid was teaching himself how to tie knots (you don’t know where he learned it from.) Before he could even speak, he was singing “Anchors Aweigh”, and you didn’t even know it was the fight song of the United States Naval Academy and the march of the United States Navy until your neighbor had to point it out to you!

And so now the day has come for your toddler to ship off. What will he make of himself? Will he learn how to eat with a real fork? Will he be able to keep that adorable speech impediment where he substitutes his "r's" for "w's", or will the Navy wash it out of him? Are you even doing the right thing by sending your toddler off to sea with a crew of grown adults who are not his parents? It might be illegal, but there's no time to think about it now! Let other people question your parenting decisions - right now, you've got to suit that little guy up in this toddler sailor costume and get him ready to set sail! Farewell to toddler joys! Anchors aweigh, little buddy, anchors aweigh!