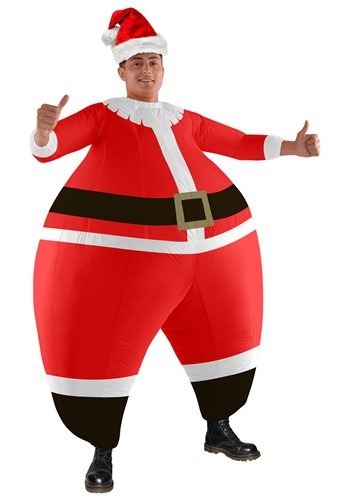 Santa Claus is famous for his charitable acts to all the good boys and girls around the world. We already know that. But did you know that in the North Pole, he's popular for his wild stories? That's right! The Pole can be rather isolating for the elves, penguins, and other magical Arctic creatures. But Santa's enterprising tales never fail to make the long winters interesting. Invite the big man to your penguin igloo for a cup of hot cocoa and you'll be regaled with stories. You might hear about the time that a forgetful father stocked their fireplace just as Santa was scooching down the chimney. Or the time Santa lost his list halfway over the Atlantic and had to guess what present went to which kid, some kid in Spain was very confused when they received a pair of snowshoes but Santa just looked at this mishap as a learning experience. That's just the kind of guy ol' Saint Nick is!

Do you want to step into Santa's shoes? This costume will make sure you go big before you go home! The suit inflates with a battery-powered fan that's mounted in a pocket at the back. Zipping up the back, this suit makes a hilarious impact at any holiday event. Perfect for holiday parades, Christmas market entertainment, and parties, you'll find everyone gets a little more holly jolly when this over-the-top costume is in the room!

This costume may seem a little cumbersome but we think it would be hilarious to see this Santa doing classic winter activities. Ice skating, cross country skiing, snowball fighting... anyone who lives in a northern climate knows that it's the little things that make the cold weather more bearable. But when you show up to entertain in this costume, people might realize that it's the big things too!