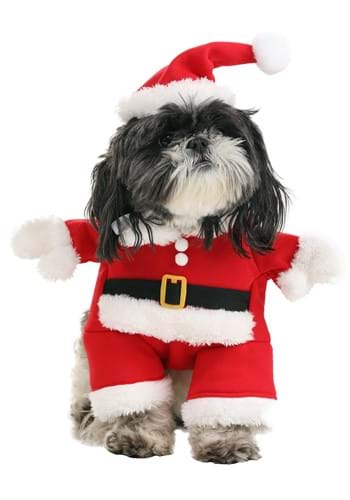 Did you hear that? There was a noise on the roof! But instead of the pawing and prancing of eight tiny reindeer, it sounded like the clicking and trotting of four cute, furry feet. It must be Santa Paws! (For those of you who haven't been paying attention, that's Santa's dog whom he sometimes sends in to pinch-hit when he wants to spend the holidays at home with Mrs. Claus.)

Your furry friend will spread smiles like snowflakes when people see him in this exclusive Santa Dog Costume! Made of super-soft red polyester sweatshirt fleece, the outfit slips on over your pet's front legs and features gathered elastic at the bottom of the chest opening. The front is sewn with stuffed arms that end in white mitts, and is decorated with white faux fur, pom-poms, and a sewn-on black ribbon belt accented with a gold-tone buckle. The included Santa hat ties under your dog's chin.

As soon as he promised not to chase them anymore, the reindeer didn't mind pulling a sweet puppy like this guy through the sky on Christmas Eve. He hops briskly down the chimney with the big red Santa bag clenched tightly in his teeth, distributes all the presents (if there are any toy balls, he plays with them for a little while), and enjoys the milk and cookies left out for him. Next year, if you wouldn't mind leaving a dog bone or two, he'll make sure you have a spot on the Nice List.