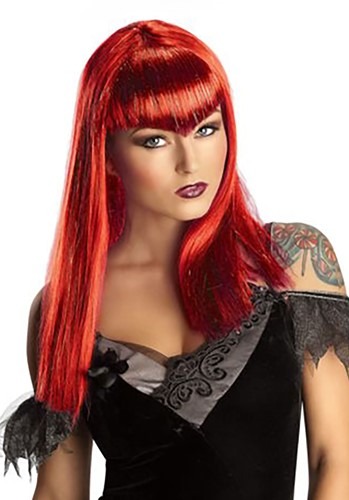 People have a lot of misconceptions about vampires. There's so much false information out there! And just like with witches, most of the public has a very dated idea of the vampire persona, style, and culture. But there is a lot more to vampire life than sleeping in coffins, wearing dark heavy cloaks, and speaking with a heavy accent. These days, vampires are a global species, residing in every country of the world. Most vampires speak at least 2 languages. And there's a growing vampire "foodie" scene (though, you don't want to know what that "food" consists of).

Vampires are smart, sophisticated, complex creatures with a flair for fabulous nightlife. And this Adult Red Glitter Vampire Wig can help you turn your vampire costume from a stale stereotype to a look with its pulse on the finger of true, contemporary vampire culture.

This unique wig turns you into a young, modern vampire instantly! It's made of synthetic, ruby-red hair atop a mesh cap, with an elastic edge for a snug fit. The strands of this straight-hair wig shimmer under the light of the full moon, while the pointed bangs show the world just who you are: a hip, trendsetting vampiredss who is anything but expected!