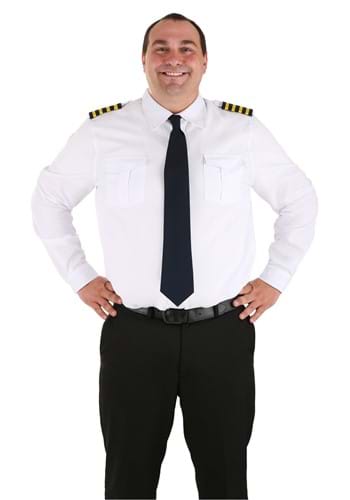 Do you have dreams of seeing the world? At travel bucket list can become overwhelming pretty quickly. It might start out pretty short. Maybe you've got a couple of classics on there like New York. But then you start traveling and your bucket list doesn't get shorter. In fact, the list just starts to grow! You go to New York and visit the Met and learn all about different parts of the world and then all the sudden you need to see Roman statues in Rome. Yep, Italy is now on the list. Oh, and while you were in New York you also tried sushi, went to the Russian ballet, and heard some amazing street music in Central Park. So you also have to add Japan, Moscow, and New Orleans to your travel itinerary. Wouldn't it be wonderful if there was a profession that could take you around the world with minimal fiscal sacrifice?

While our Made by Us pilot shirt won't give you the license to fly a passenger jet all on your own, you just might be inspired to book that ticket across the pond when you see yourself in it! The crisp white look has Captain stripes on the shoulder, an attached tie, two pockets with button closure, and crisp buttoned sleeve cuffs. Finish this look off with black dress pants and a pair of aviators and you'll be ready for take-off.

While this costume is great on its own, you'll also have a great time putting together a group costume. Recruit friends to dress up as flight attendants and TSA agents and you'll have a crew that no one will forget any time soon. There's no better way to start up a conversation about where you guys should go next. You might even say the sky's the limit!