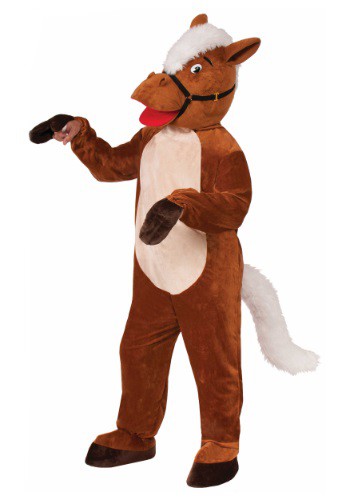 Well, look who it is, trotting over to say hello. It’s Henry the Horse! He doesn’t like to be confused with any other famous talking horses, no siree Ed. Err, Bob, sorry Henry. Slip of the tongue. Yeah, yeah, we know how much cooler you are than any other talking horses, Henry. No one’s disputing that. Yeah, no one wouldn’t love galloping around in this Adult Henry the Horse Mascot Costume. It’s delightful. That’s not up for debate. It’s perfect for costume parties, sporting events, and hoedowns of all kind. Everyone loves cheering for a prancing pony. You’re the top stallion, Henry. But when you don’t let us mention other horses it just makes you seem kind of insecure.

Horses have really lucked out in one regard: hay is for them. Sure, we might give it to other animals, and roll it up in big wheels for God-knows-what purpose (can you tell we’re city folk?), but the saying doesn’t go, “Hay is for horses, and cows, and all that other stuff too.” No, hay is for horses, and everything else is a creative alternative at best, and possibly misuse. No other animal has such a statement so clearly delineating what is for them. Trix are for kids, but as of yet, children haven’t been designated as their own species.

Everyone loves a horsey, and this one couldn’t be friendlier. And it’s the full monty––covering every inch of you in horsey goodness. You can just lazily amble around it, give rides to children, trot, gallop, or go all out and perform steeplechase jumps. If you’re convincing enough, maybe you can be the first riderless entry into an equestrian contest, although good luck competing with real horses. We hear they’re pretty fast.