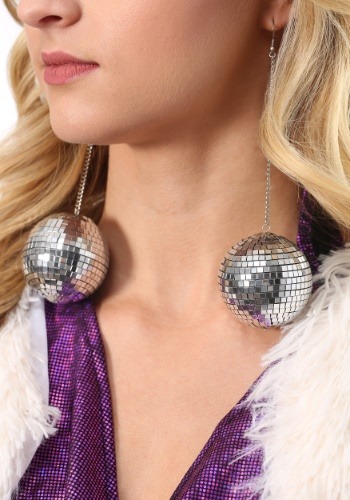 BECOME THE STAR OF THE SCENE

No matter what decade you dwell in, it's never a bad thing to be the center of attention.  A little glitz and glamor to your look makes you shine like the star you are.  And, even if disco may be arguably dead, who says that you can't still channel the glory of a lost age!?

With the right accessorizing, you can not only be part of the mod-squad no matter what year it is, but you can be a literally shining example of stardom, too!  If only there were an icon of the age that would be recognized anywhere...

Fear not!  Our in-house designers would never let you go without that extra dose of sparkling splendor.  With these exclusive 1960's Disco Ball Earrings, you can be sure that you're a modernist no matter what year it is!  (Though, it will certainly accentuate a 60's style especially!)  These 2" diameter plastic sphere earrings are fashioned after the iconic disco ball and feature reflective silver plates for the real look.  Hanging from a 3" chain, they are light but super noticeable.  Perfect for all your fancy looks!

THE DISCO IS WHEREVER YOU ARE

The only thing worse than disco being dead is a disco party going on that you haven't been invited to!  Ensure that such a thing is never possible when the disco balls come with you thanks to these 1960's Mod Earrings.  Shine all day and night long because you're the dancing queen, now!