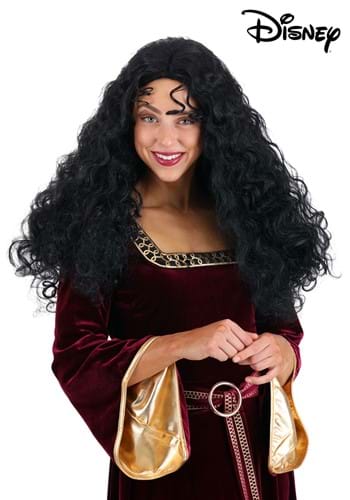 Disney’s Tangled introduced the world to a whole new cast of classic characters. It took no time for everyone to fall for Rapunzel and Flynn. Pascal earned his place in pet-naming history. Maximus had his fans. Even the gang of ruffians stole hearts with their big dreams. And for some, Mother Gothel immediately joined Disney’s league of villains with her huge personality and killer style!

So, when you’re putting together a Mother Gothel Halloween costume, you know there are some details that can’t be missed! In the rather brief time she’s been around, the dress, cloak, and dark makeup, have become wholly recognizable. And then there’s her hair! It’s become about as iconic as Rapunzel’s magic, glowing locks!

Ensure you have everything you need to bring Mother Gothel to life when you add this Disney’s Tangled Mother Gothel Wig to your ensemble! The officially licensed wig starts with a fitted cap to secure Gothel’s voluminous lengths.

The jet black curls then cascade from a center part. Three single-strand curls also extend from the front, guaranteeing the wig looks identical to Gothel’s impressive hairstyle. Paired with our Made By Us Mother Gothel costume, this exclusive accessory is sure to prove Mother knows best—about fashion at least!