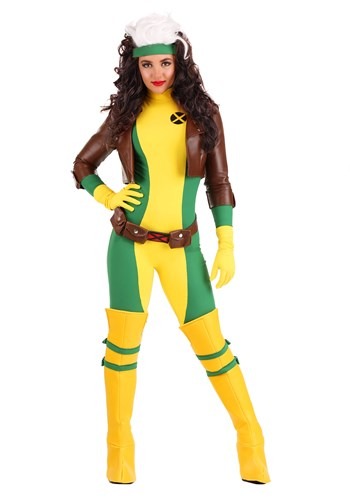 Which mutant powers do you think would be the most amazing to acquire? It's the age-old question, really. Do you want to be invisible or be able to fly? Of course, in the Marvel Universe, limiting options to just those two is pretty silly. How about the ability to create fire? What about shooting lasers from your eyes? Charging up objects with kinetic energy? Psychically linking to the spirit of a planet to turn it into a galactic spaceship? (Okay, that last one we made up.)

The point is that there are so many amazing abilities out there, how can anyone choose? Of course, if you are Rogue, choice isn't so much of a problem! Rogue's ability to take on the powers and even memories of whoever she touches makes her a mutant that could potentially do anything! (Sure, sure, technically she can't usually control those abilities and risks killing folks she touches... but that's why she has gloves!)

Bring together some of the most amazing powers that have ever come out of the Marvel multiverse with this Premium Rogue costume. This bodysuit has the green and yellow color scheme made especially famous from the animated X-Men show as well as the iconic X logo on the chest. A little style goes a long way with a cropped faux-leather jacket and thigh-high boot covers! Don't forget your yellow gloves or skin contact could be dangerous for others. (That white streak in Rogue's hair came from permanently absorbing Captain Marvel's powers and nearly killing them both, after all!)

When you slide into this Rogue costume, you'll feel the ability to become just about anyone... just like Rogue, herself! Just be careful whose powers you choose to absorb because things can get pretty confusing when too many marvelous abilities get bundled up in one amazing character. We're sure you're going to have an amazing (X-Men) time, either way!