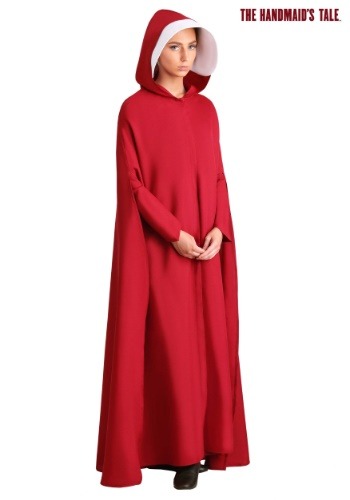 You're not a fan of Hulu's The Handmaid's Tale. Nope. You're THE fan. You set aside every Wednesday night to view the new episode. You read every blog and opinion piece about the plot development. You even have, "Nolite te Bastardes Carborundorum" tattooed on your arm. There's not much to look forward to in Gilead right now; the world is looking pretty bleak. Might we offer this Handmaid's Tale Plus Size Women's Costume as a tiny silver lining?

You can live out Halloween night as your favorite Handmaid, whether it be Ofglen, Ofwarren, or Offred. But here's the great thing about this costume: you make the rules! With no Commanders and no Eyes about, you can feel free to speak out against Gilead and try to raise awareness for the plight of its citizens. Tomorrow, you'll go back to being a superfan and engrossed audience member, but tonight you get to live in the world that's haunted you for so long. And what is Halloween for if not to prove totally thrilling and terrifying, all at once?

Seeing how you only get one outfit in Gilead, you should make it count! This exclusive look was created in our costume studios in conjunction with Hulu, to ensure the design is spot-on and the craft is durable enough to withstand the rough conditions of Gilead. Aunt Lydia herself watched over our designers until they got it right (as you can imagine, it was perfected rather quickly). Featuring the Handmaid's signature red robe and winglike white bonnet, this costume is as well-crafted as it is spine-tingling—which is exactly the look we were going for! Praise Be!

We know Season 2 has been tough to watch—with the (spoiler alert!) demise of Mayday, thwarted escape to Canada, and then that gut-wrenching scene between June and Hannah. But, keep your chin up; things have to get better in Gilead. Until they do, don this red robe and pledge your allegiance to the show you cannot stop watching!