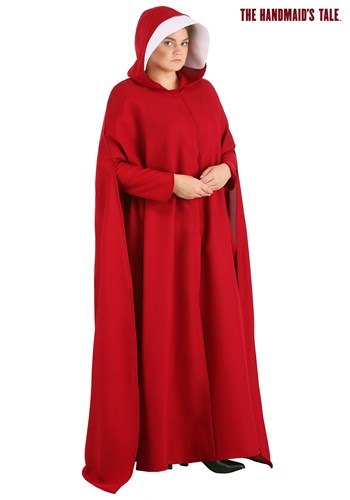 Blessed be the Fight

The Handmaids of Gilead have been through a lot. And we’ve been there, by their side, feeling their emotions all along. Our time watching the goings-on in Gilead have become a little unpredictable. Sometimes we’re boiling in anger. Sometimes we’re hopeless and grieving for missed opportunities. And every once in awhile, we’re smiling in triumph. Because even though the powers that be in Gilead would like to think that they’ve oppressed the handmaids enough to silence them, the women in red are ready to do what they must. Sometimes that means whispering secrets at Loaves and Fishes. Sometimes that simply means dropping a bar of soap into the shopping bag of a friend. When every moment is policed, every rebellious movement is a risk. Taking on the red is no longer a simple sign of submission, taking on the red is taking on the fight.

Directly inspired by Hulu’s epic rendition of Margarette Atwood's The Handmaid’s Tale, our in-house designers took care to capture the tone when putting together this costume. The flowing red robe is floor length with fitted sleeves for utmost modesty. While the robe is loose, the slits are open on the sides so you’ll want to layer your own clothing underneath. The wide bonnet has an elastic edge along the inside of the back for a fitted feel but a natural look. With a bright red color and modest cut, you’ll find that this costume brings just a bit of Gilead rebellion to your front door!

Burning Down the House

Who knew putting on the robes of a Handmaid could make you feel so strong? While this costume is amazing on its own, it’s even better when you pair up with friends that are dressed up as characters from the show. After all, if you’re going to change things, you’re going to need allies.