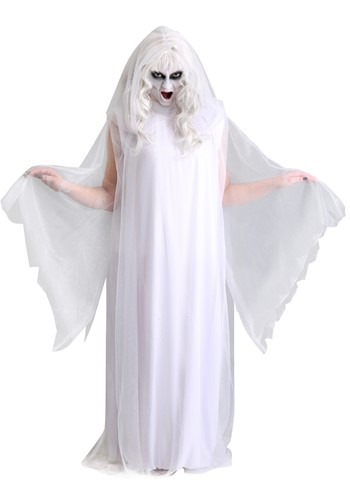 We're not going to say that Cindy was the bane of the office when she was alive. But we're not going to say she was the best either. Her first week, she got her hand stuck in the vending machine. That wouldn't have been that bad but later on, she also convinced a new hire to stick her hand in the vending machine as well, causing a repeat of her embarrassing incident. Prank calls and jump scares were her M.O. Coworkers often found photocopies of her face regularly in their printed documents. She was, in short, a wild card.

So they shouldn't have been surprised that the Monday after Cindy's funeral, all the snacks were floating around in the vending machine. No more verbal warnings, no more pay cuts. Cindy could finally let loose in the office without holding back and there was nothing anyone could do about it!

Ramp up your eerie looks with a high-quality Made by Us ghost costume! This robe is at once glamorous and unique. The shift dress has a base of solid white fabric that's layered under knit mesh. It's topped with a mesh hood that'll help any ghost look extra spooky. The long mesh sleeves features uneven hems and a dramatic cut that'll make your haunting silhouette extra unforgettable.

Think you'll make a great ghost? We think so too! You'll love playing the part of Victorian terror in layers of eerie knit mesh. There are so many options when it comes to fun haunts. Pose in darkly lit windows until neighborhood kids catch sight of you and scream, slowly creep up the stairs at two o'clock in the morning, or simply cause some mischief around the office like Cindy did. Who knew pulling the graveyard shift would be so much fun?