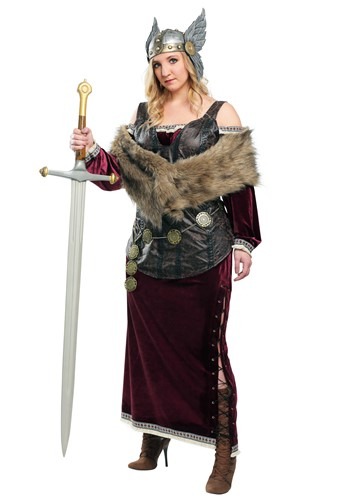 R-E-S-P-E-C-T, find out what it means to Viking deities. Mostly, respect meant keeping your head high, keeping the whining to a minimum and fighting til the end. If Viking warriors could do that than they would be carried to Valhalla by a type of Norse goddess called a Valkyrie. Sweet deal, eh?

The goddesses of the Vikings had it together, at least compared to the gods. They never kidnapped people, plotted violent events, or schemed to make the other gods feud with each other. The Valkyries focused on getting their important jobs done and hit up the mead hall in after hours. Hmm, sounds similar to human women in the modern era. And when Valhalla got too loud and violent? Who'd have thought a heavenly mead hall full of Viking warriors would be loud and violent? The Valkyries would seek some peace and quiet on earth, swooping into battles on their flying horses surrounded by ravens that they could communicate with. That doesn't sound like a bad gig.

It's easy to channel your inner fierce goddess for your next costumed event. Lucky for you, Odin has blessed us mere mortals with a perfectly balanced costume that's at once cozy and sexy. In velvet and faux fur, you'll be ready to patrol the wind-blown battlefields of Norway while the off the shoulder dress with thigh high skirt slit makes you ready to party in Valhalla. Talk about versatility! The faux leather armor will let those warriors know you're no one to be messed with, even Thor has to lay some respect down for this Valkyrie.