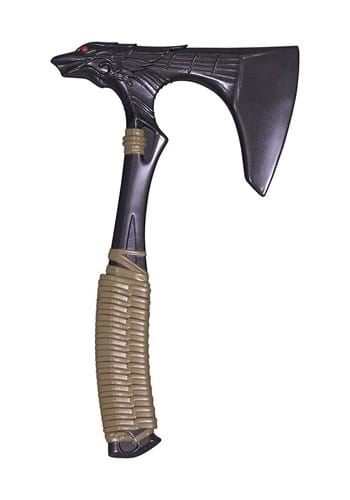 The many skills that Bloodhound uses are key in every match. From the eye of the Allfather to the Beast of the Hunt power, they are integral to the strategy in every fight. But, in addition to those skills as a tracker and woodsman, Bloodhound also relies on certain tools to get the job done, primitive as they may be.

One of the oldest tools that survive from pre-history is the axe. The first axes were little more than rocks with a slight edge, either held with a hand or attached to a stick for additional power. These eventually developed into the axes of today, from hatchets to mauls and tools of warfare. Now the development of the axe has reached its final form!

Honor Those Who Have Risen

This Apex Legends Raven’s Bite Weapon is a replica of the Bloodhound’s Axe from the game. This molded plastic weapon is a little over a foot long, which makes it a powerful and elegant tool in the right hands. The raven beak and feathers are a perfect match for the weapon found in game. Trust in nature, the Allfather, and your own instincts, sure, but also trust in this mighty axe!