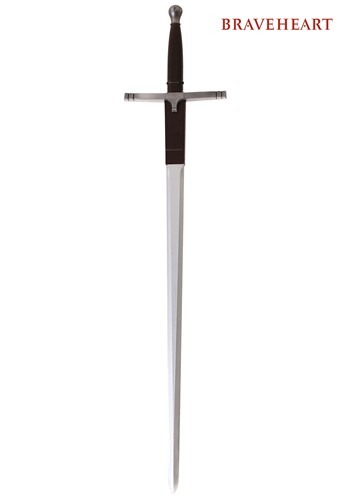 William Wallace seems larger than life in the stories about him. Some accounts say he was as much as seven feet tall and as strong as a giant, while others say he could shoot fire from his eyes and lightning bolts from his... other areas. It seems only natural, then, that such a legendary Guardian of Scotland would ride into battle with an equally ginormous blade. Now, we're not saying the movie Braveheart is 100% historically accurate (some of the soldiers are wearing wristwatches and blue jeans, for haggis's sake!). But, the huge claymore sword Sir Wallace carries in it definitely looks like the kind of sword a Scottish commander would use.

We know, of course, that you just have huge party plans, and aren't actually planning on overthrowing the English. Soooo you're only going to need a replica sword, and not real deal steel. Add this William Wallace sword is going to be just the right accessory to complete your Braveheart costume. It's made and designed by us right here in our costume studios, and it's officially licensed by Paramount Pictures, so it's ready for costume fun. Rigid foam means you aren't going to accidentally dismember your cosplaying friends, and since it's simple foam and paint, it's a movie replica piece that you can actually afford. So when it's time to don your kilt, slap blue war paint over half of your face, and hit the battlefield you'll look just like the fearsome freedom fighter. Oh, our mistake, we meant FREEEDOOOOM fighter!