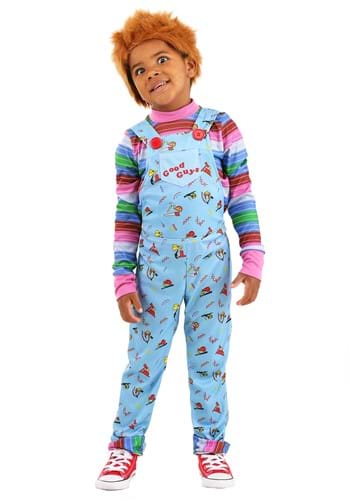 Every parent, aunt or uncle, or passerby has that occasional moment when they look at an adorable toddler tyke say think, "Aww, how cute!" while they are thinking, 'They're a little bit creepy, right?' Kiddos have a way of being huggable one moment and just a touch monstrous the next... especially if there is a chocolate chip cookie nearby that isn't being handed over! We suppose that's why they call it the 'Terrible Twos' and the 'Ferocious Fours!'

We tend to think that the best way to manage all of that stress is to lean into it and have fun with the manic menace! There are a ton of characters out there who have done a pretty good job of mixing sweet and scary, but none of them have done quite so shocking a job as the guys at Good Guy Dolls! Even before one of them became animated with the soul of a serial killer, there was just something about those dolls that could make someone shiver!

If you'd like to have a serious chuckle with your friends and family while dressing up your tyke, give this Child's Play Chucky toddler costume a try! The costume is a colorful, pullover jersey shirt that pairs with a stretch knit pair of overalls that bring the character to life... (but not literally). The overalls are decorated with all-over print featuring the adorable Good Guy details as they were before they got a touch messy. Top off the transformation with Chucky's iconic bright orange wig and your dear will be ready to spread some dreadful cheer!

We're guessing that your tyke won't know too much about the truth of Chucky and his haunting of the Good Guys doll. So, it's likely that your tot will just be enjoying a fun costume while chasing people down for treats. Still, it might be even more fun to teach them how to give a creepy grin while they're at it!