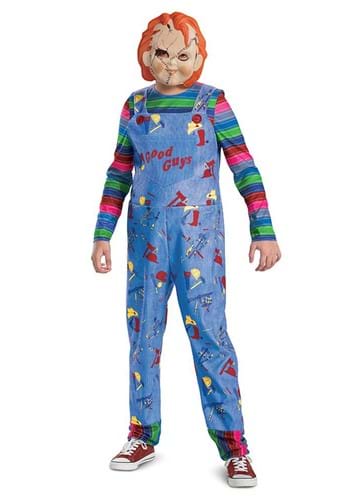 They really are! No offense to your mom's Cabbage Patch memories or anything, but dolls really are scary. You'd think after Annabelle we'd have learned our lesson as a society and refused to create more china dolls with chubby cheeks and dead-eyed stares, but, well, here we are. Charles Lee Ray doesn't mind, however. Without a doll handy, he never would have been able to use black magic to transfer his soul from his dying body and keep his reign of terror going. And even if dolls aren't as handy at causing chaos than full-grown humans, at least no one suspects them until it's much too late!

Having a killer outfit will be child's play for you this year when you wear the officially licensed Child's Play Chucky Classic Costume for Kids! Look cute yet somehow sinister in a one-piece polyester jumpsuit that zips up the back and is designed to look like a rainbow shirt under corduroy overalls. The overall part is decorated with a pattern of graphics from the movie, including saws, axes, hard hats and fire hats, and the Good Guys logo on the chest pocket. The plastic mask slips on via an elastic band around the back of your head and by the looks of the faux cracking detail, Chucky's been busy!

Be the terror of the playroom and delight all your friends with this nostalgic costume! It's perfect for Halloween parties or trick-or-treating as long as you don't run into Mike Norris.