Spongebob Squarepants Feed Me Costume for all Toddlers 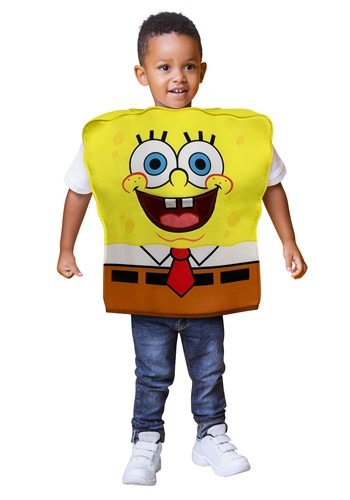 Who lives in a pineapple under the sea?

We admit, if you explain Spongebob Squarepants, the classic Nickelodeon cartoon series sounds a bit... weird. We can just imagine the pitch meeting: "Well, it's a show about a sponge, like a kitchen sponge. But he's alive! And he wears a white button-up shirt and brown pants and even a red tie. He lives... no, not in a kitchen drawer. Actually, he lives in a pineapple. A hollowed out pineapple on the bottom of the ocean. He shares it with his pet snail. His neighbor is a squid, and his best friend is a starfish. Oh, and there's a squirrel there, too. No, she can't breathe underwater... Don't be silly. She has an astronaut suit with an air tank. And the sponge works at a fast-food joint run by a crab, who's always guarding his secret food recipe from an evil plankton. When the sponge isn't working, he and the starfish like to catch jellyfish to milk them like cows and use the jelly for sea-nut butter and jelly sandwiches. You didn't know that sponges eat SP-and-J sandwiches? Well, they do. What did you think they ate?"

Yeah, that must have been some pitch. But we're so glad that studio execs took a risk and launched a show about a yellow sponge, because now we have the Spongebob Squarepants that everyone loves!

Get ready for some underwater fun with this Spongebob Squarepants Feed Me Toddler Costume. The pullover costume looks just like Spongebob's smiling yellow face, with his classic white-shirt-and-brown-pants featured underneath. His black belt and red tie are also featured on the costume's front, and there are white shirt sleeves on the side.

Who's ready for some F-U-N... FUN? Your little guy will be with this Spongebob Squarepants Feed Me Toddler Costume!