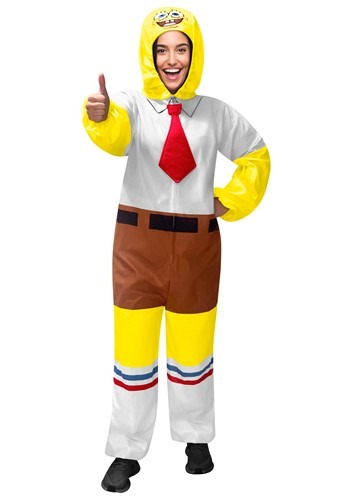 Do you love dressing up, but have an unfortunate tendency to forget part of your costume? There's nothing as frustrating as arriving at a costume party, eager to show off your fantastic and meticulously detailed dragon costume with working tail, only to realize you've forgotten your head. Or arriving at a wizard-themed costume party, dressed like a certain Boy Who Lived, only to realize you didn't just forget your wand, you also forgot your pants.

That is so frustrating! But it can be really difficult to remember all the little details and accessories for every costume. You're just certain the same terrible thing will happen at your next party. You really want to dress like SpongeBob SquarePants, your favorite sentient aquatic sponge, but you know you'll forget some minor detail, like his tie or his square pants. If only there was a costume that could combine everything for you and ensure that nothing could be forogtten!

We have exactly what you need, thanks to this SpongeBob SquarePants Adult Union Suit/Onsie. The onesie encompasses all of SpongeBob's iconic look while letting you only worry about one thing to wear for the evening. This onesie is a one-stop-shop for SpongeBob fans and looks just like SpongeBob's classic cartoon outfit, including a white button-up shirt, brown pants, a black belt, a red tie and even red-and-blue-striped socks. Not only that, it goes one step farther and includes Spongebob's yellow skin, which goes perfectly with his face grinning out at you on the top of the attached hood. Some people may call themselves SpongeBob fans, but do they go all out and wear his skin? We don't think so.

With this SpongeBob SquarePants Adult Union Suit/Onsie, you're guaranteed to be ready for your next costume party. The one thing you have to remember is your shoes, but you can totally do that... right? Right...?