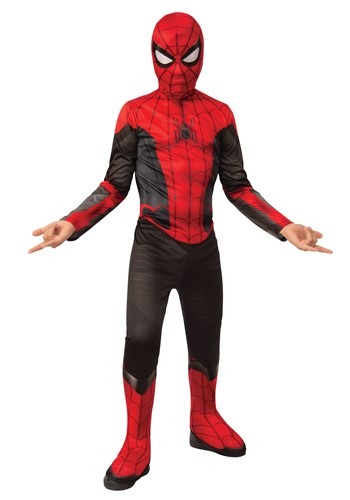 Spider-Man has worn many suits during his career. In the comic books, he started out in a simple red and black outfit with web designs and a spider symbol in the front. He swapped to a black and white suit for a while when he was struggling with a violent symbiote. Then, he changed into an Iron Man-style suit during the whole Civil War fiasco. He's also been known to wear a Fantastic Four suit with a paper bag mask when his options run out!

Well, Spider-Man: Far From Home takes his look back to Steve Ditko's original design of the wall-crawler! We couldn't be more excited about and we're betting you have a young Spidey fan who's just as excited about the suit if you're here checking out this Spider-Man costume for kids.

If your child is ready to head on a web-slinging adventure through the neighborhood, then get ready for this Spider-Man Far From Home Red and Black Costume. The costume takes its cue from the classic comics to deliver a look that's both classic and modern. The jumpsuit fits with a fastener in the back. It features the red and black color scheme seen in the movie and it even has plenty of printed webbing details. The printed spider symbol appears on the front and a longer spider emblem in the back. The legs end in foot covers, which can be worn over the top of any pair of shoes! That means your little superhero will be one comfortable friendly neighborhood Spider-Man! Finally, the mask, which features mesh in the eyes for vision, puts the final touch on the whole look.

If your child is ready to team up with Nick Fury to defeat the Elements, then he's ready for this officially licensed Spider-Man costume from the Marvel Cinematic Universe.