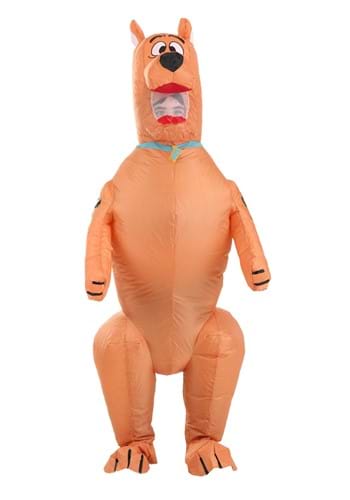 You've probably watched an episode of Scooby-Doo or two. We know that we sure have! (Okay, maybe we've seen just about every Scooby-Doo episode there is!) Well, isn't it rather interesting that each episode ends with someone being unmasked? In the core, original series, every single scary occurrence is just some villain wearing a convincing costume. It's never a real ghost or a swamp monster, but just an ordinary person with some devious intentions. Now, what if we told you that Scooby-Doo was just someone wearing a costume? That would be so... meta. If the crew solving mysteries involving masked villains was headed by a person wearing a mask, it would totally blow our minds!

Well, now you can be meta by dressing up in this officially licensed Scooby-Doo costume! It transforms your child into costume-wearing member of the Mystery Machine crew.

This costume is a great option for any little Scooby fan! It comes with a jumpsuit made out of a windbreaker-style fabric. The exterior has printed details, like Scooby's face. The jumpsuit features a back zipper and elastic bands in the ankles to create a fully airtight suit. The fan is installed into the back of the costume and it fully inflates the costume with the press of a button. It inflates in just a few minutes! The battery pack can be attached to your clothing. The hood has a mesh covering at the face for vision. Once fully inflated, the child costume recreates the classic look of your favorite mystery-solving Great Dane.

The One in the Mask

If your child is looking to solve a few mysteries with their pals, then this is the costume for them! Of course, if your little one wants a costume that really makes people think, let them know that your child is the one in the costume this time, not the villain!