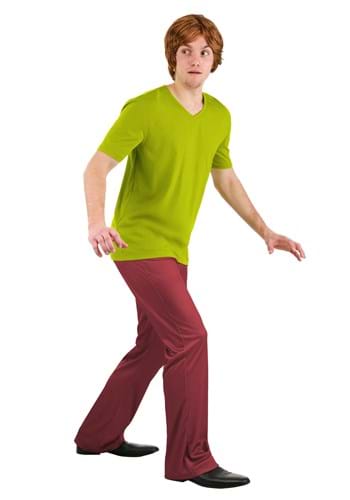 Say what you want about Shaggy but we all know that he's a man who appreciates a good sandwich. He's really inspirational, if you think about it! His sandwiches aren't limited to two measly pieces of bread. Oh no, the best sandwiches he's created are roughly the height of a two-tiered wedding cake with layers of rye bread supporting the ingredients throughout. in fact, he'll use a whole loaf of bread if he gets the chance! He'll mix everything. Ham, lettuce, cheese, ketchup, sardines. Put an olive on top and it's a culinary masterpiece! Are you ready to take on the role of Shaggy? Other than working on your sandwich skills, this costume is the best way to take on the most popular member of the Scooby Doo crew!

This fully-licensed Shaggy costume from Scooby-Doo is Made By Us, which means it was designed by our in-house creative team. It features the lime green t-shirt and the pair of maroon bell-bottoms that he's always seen wearing in the cartoons. Pair it with a Shaggy wig (sold separately) and a little scruff on your chin and you'll be ready to take a ride in the mystery machine.

Shaggy is a pretty great character on his own but he pairs best with his best friend, Scooby-Doo! After all, he's one of the only dogs out there that appreciates a sandwich as much as Shaggy does. Check out the rest of our Scooby-Doo costumes and get the whole team together for a group costume that'll make a ghoul or ghost get ready to rant about those meddling kids. Just be sure to claim Shaggy as your own before you float this idea, otherwise, someone else will get to eat sandwiches as big as their head the whole night. Zoinks!