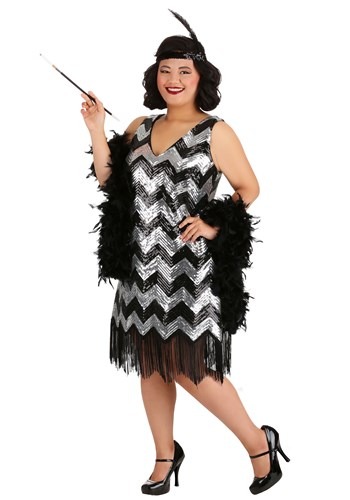 Going out these days is a little different than it was back in the twenties. Back in the day, people used to dress to the nines and headed to clubs that were utterly exclusive... how so? Well because they were often illegal, of course! Imagine wearing beaded silk gowns and feathers to a club that was in the basement of a shoe shop! That's how it went during prohibition. Just because Speakeasies were set in dank basements doesn't mean they weren't glamorous, every party is about who's there, after all. And these Speakeasies were a workshop for modern music, welcoming Jazz legends and big bands to the stage in the dimly lit smokey spaces. If sitting back and sipping a gimlet while a horns croon away on stage sounds good to you, then perhaps it's time to take a step back in time and slip into this flapper gown!

This flapper dress pays respect to an era of glamour with a modern fit. You'll find thoughtful elements from our in-house designers woven into this costume, from the lush Chevron pattern created by black and white donuts to the fringe-trimmed hem that moves as you shimmy to the music. Zipping up the back, this dress is easy to slip into, even if you've already bobbed your hair. A sequined headband tops off this costume to make sure you're ready to go as soon as it arrives!

Jazz music is pretty great over your speakers but sitting in front of a live jazz band dressed in sparkles is next level unforgettable. If you've been daydreaming about a look that will transport you to a different time, this flapper costume is just the thing. The roaring twenties might be almost a hundred years back but when you slip into this look, the jazz age is alive and well!