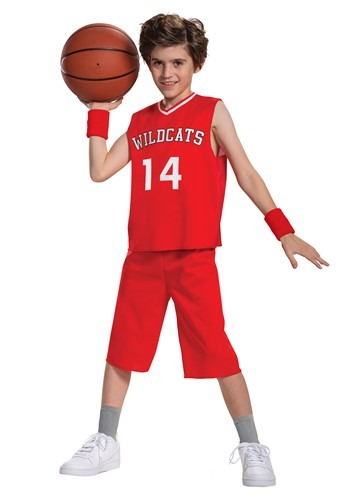 Get your head in the game!

It's down to the wire in the championship game. The Wildcats are trailing behind the Knights, 40-42. The last precious seconds are ticking by, and the Wildcat players aren't sure that they'll be able to score a shot and snatch victory from the jaws of defeat. They turn to their beloved captain, Troy. Does he have a plan? A super secret, super sneaky maneuver that will get them close enough to the hoop to score?

Oh, yeah, Troy has a plan, all right. He tosses his team a carefree grin, instructing them to follow his lead and get him the ball. With a renewed sense of purpose, the Wildcats weave their way around the court, until one finally tosses Troy the ball. He catches it easily, spinning away from an opposing player. But he's still surrounded by opposing players. How will he ever make it to the other end of the court?

Troy turns toward the hoop, hunches protectively over the basketball in his hand, and... bursts into song.

"And don't be afraid to shoot the outside 'J'... Just keep ya head in the game!"

Lead your team to its next big win with this High School Musical Boy's Troy Costume. The costume is 100 percent polyester and comes with a red top, red athletic shorts and a pair of red wristbands. The top has Troy's number 14 in big print on the front, along with "Wildcats" over it.

He shoots, he scores!

Suddenly, the rest of the Wildcats are filled with an inexplicable urge to join into Troy's song. As they start flawlessly singing in harmony, they also begin to follow an unknown choreograhy that they have never practiced, or really even learned. The Knights watch in confusion, their defenses totally shredded, as Troy effortlessly dance-dribbles around them, closer and closer to the hoop. Finally, he gets close enough and tosses the basketball through the air. Everyone's eyes latch onto the ball as it flies through the air and swishes through the hoop.

The Wildcats win! And all because they had their head in the game!