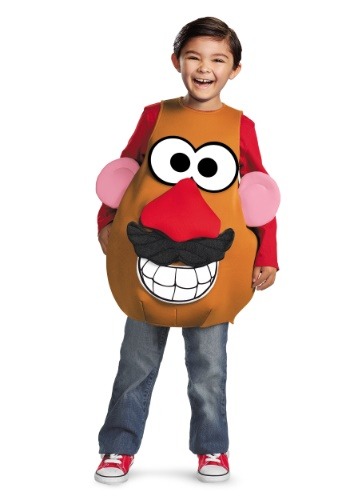 What is up with all these 'I look like a potato' jokes circulating on the internet lately? Now it seems, among all the cat puns and 'Ermahgerd' memes, potatoes are emerging from an obscure corner of the pantry to bask in the internet spotlight. We're all here for it, every spud one-liner and every tater wisecrack, but we know two individuals who aren't understanding of the recent potato hoopla: Mr. and Mrs. Potato Head.

Mr. and Mrs. Potato have been around since the early '50s, so why are potatoes just now living their best internet lives? That's what Mr. and Mrs. Potato would like to know and they're understandably sour about the whole thing. Why aren't people making memes and puns about their undying love and lasting relationship? Why aren't they considered 'relationship goals'? They're the OG spuds; they're singlehandedly responsible for putting potatoes on the pop-culture map.

If your kids love and play with these iconic toys, Mr. and Mrs. Potato Head would personally appreciate it if they wore this kids costume to circulate their infamous image throughout the web. Take many pictures of your child disguised in the Mrs/Mr. Potato Head kid's costume and broadcast it to all your social media followers.

Become both Mr. and Mrs. Potato Head with one convenient unisex costume for kids. The soft tunic has attached pink ears below each arm opening, and you'll receive both characters' faces that adhere to the costume. Collect candy as Mr. Potato Head then go back for a second time as Mrs. Potato Head... it's genius! The faces can be changed conveniently via fabric hook and loop fasteners and it's a great option for all kids ages 7 and above.

Kids not only love this costume because it features two characters in one but it also allows children to wear their most comfortable and warm clothing underneath the tunic!