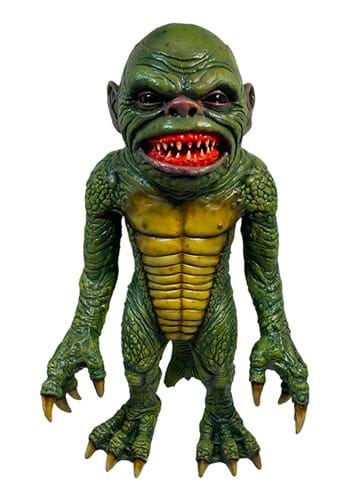 When we first found these little guys popping up all over our workplace, we were shocked and appalled! For one, they have no sense of propriety or etiquette, and only seem to pop up when they think they are being terribly clever. They soon learned that we are cleverer than they suspected! We set up mouse traps and fly paper all over the place. You should have seen their horrible little faces as they realized they’d been captured by some normal humans! We’ll never forget the satisfaction of ending their reign of terror over us at the office.

That was where the real work began. Over the last ten years, we have used cat food to train these little guys to be the perfect pets. Now all that work is paying off for fans of the Ghoulie franchise. These little guys still look mean, but they are the friendliest, best-behaved pets imaginable. That is our gift to you!

Though these Ghoulies still have their characteristic mottled skin, bloody, sharp-toothed maw, and hard tail, they are sweet as cherry pie. These guys love nothing more than being held, or being put on a shadowy shelf where they can startle the unaware. We never thought we would say this, but Ghoulies are truly man’s best friend!