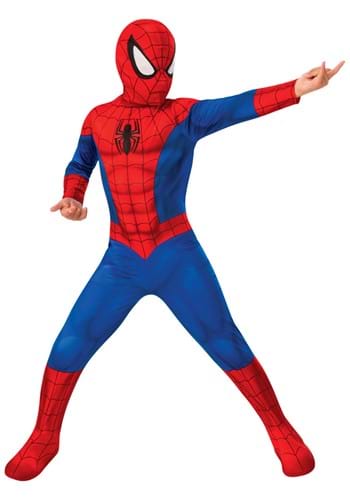 Spidey to the Rescue!

Superheroes are so awesome that sometimes they seem like they're out of this world. Not Peter Parker, though - he's easy to relate to! Peter's just your average kid, despite the fact that he was bitten by a radioactive spider and can now climb walls and stick to ceilings as if his hands were coated in superglue. He may have special powers, but all he really wants is to hang out with his friends, get through the school year, and maybe get the girl of his dreams. When danger threatens and the world needs a hero, he'll suit up with his fellow Avengers and take care of business, but when it's all over, he's just your friendly neighborhood Spider-Man!

With great power comes great responsibility...and when you have the power of a great outfit thanks to this officially licensed Deluxe Ultimate Spider-Man Kid's Costume, your responsibility is to show it off! The one-piece, zip-up, red and blue jumpsuit looks just like Spider-Man's super suit from the classic movies and Marvel comics. The chest and legs are padded to give you the appearance of super muscles without having to do leg and pecs exercises during gym class. The chest and shoe covers feature printed web graphics, and Spider-Man's spider symbol is printed below the collar. Slip on the attached mask - the mesh viewing ports let you see where you're swinging!

Aunt Mae Would Be Proud

It's tough to juggle homework, friends, fun, and hero business, but Parker makes it look like a blast. Whether you're protecting half of the universe from being erased by Thanos or collecting trick-or-treat candy, this suit has you covered!