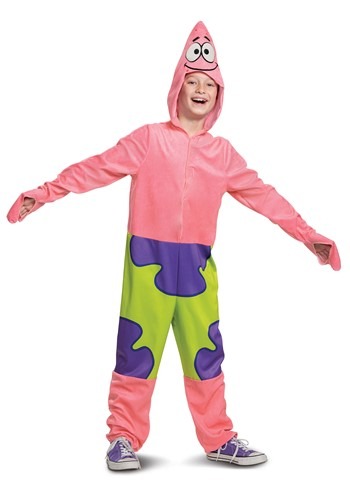 Wait, what's that? People call SpongeBob the star of the show to mean that he's the main character and it's NOT a comment on his physical shape? Oh... wow! Well, that doesn't change the fact that Patrick is a star, not only in geometric shape, but also because he's one lovable character from the Nickelodeon show. Now, with this officially licensed costume, your child can be a star too—Patrick Star to be exact!

This Kid's SpongeBob SquarePants Patrick Star Costume helps your child turn into the iconic cartoon character! The costume comes with a pink hooded jumpsuit made out of a soft material that has hook & loop fastener in front. It has a pair of green and purple shorts designed into the legs. The legs have elastic bands around the ankles to help provide a cozy fit. The hood is shaped like Patrick Star's head and it has his smiling face and a pair of big, cartoonish eyes on the front. Of course, the best part about this costume is that your child can wear their normal clothes when they slip into it, so it's super-easy for any child to change into!

If your child is a star, or if they just want to have a star-like shape, then this Patrick Star costume is a great choice for your child. It's the easiest way for any SpongeBob SquarePants fan to transform into their favorite character.