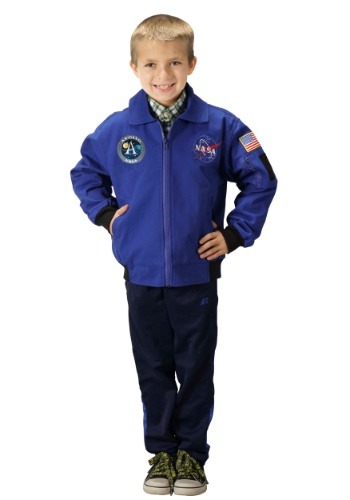 One Giant Leap for Childkind

These days, it's tough to be the "first" to do anything. Someone has already been the first to climb Mount Everest, the first to fly around the world, the first to walk across Antarctica, and of course, everyone knows the first man on the moon (and the second...we think Buzz may forever regret letting Neil go out the door first!).

But your child really wants to set their own record. They tried being the first kid to eat 20 whole pizzas (that didn't end well) and the first kid to not talk to their little sister for a whole year (but you quickly put a stop to that). We think your little adventurer would make a great first child on the moon! This NASA Apollo 11 Kid's Flight Jacket can inspire their new goal with its authenticity and cool details. Of course, you may need to ease up on curfew a bit; it's hard to make it to the moon and back before dinner!

Other kids in their class will be begging to join your child's flight crew when they see them show up in this totally awesome costume! The shell is 100% cotton and it fully zips in the front. It boasts two functional pockets on the body, as well as an added pocket on the arm. Officially licensed, this jacket is NASA approved, and it shows with its authentic patches, as well as the official Apollo 11 design on the back. Neil Armstrong's famous words, "That's one small step for man, one giant leap for mankind" is appliqued on the back as well, reminding your little one to dream big as they plan their mission!

Your child will fall asleep dreaming of grand interplanetary adventures after a day in this darling flight jacket. Whether they wear it for Halloween or they simply slip it on to imagine the amazing things they'll do someday, we read their enthusiasm loud and clear. Over and out.