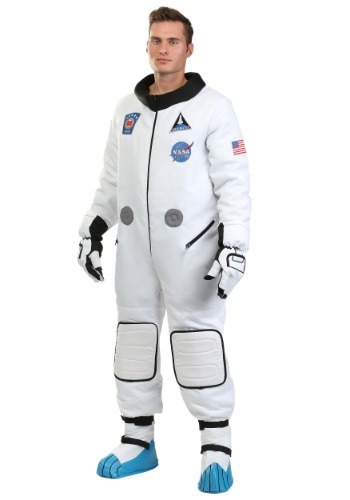 Excitement for space exploration seems to hop generations.  One moment, we're literally racing to get to the moon before anyone else.  The next moment, we seem to glance up at the stars and forget the amazing sights that we might one day see.  If we ever plan on exploring those galaxies far, far away and boldly go where we haven't gone before, we better get our space force moving from the hypothetical and into hyperdrive!

The positive thing is that anyone who sees someone with the illustrious look of a space explorer pretty much immediately recognizes the potential for what it is and that excitement rises even faster than a shuttle is going to take off to the upper atmosphere.  Due to that, you can feel secure that bounding even in our normal gravitational strength is going to draw all sorts of attention to your newfound stardom!

Our team of head-in-the-clouds designers have woven the stuff of stars together to create this high-quality Men's Deluxe Astronaut Costume.  Made by Us, this exclusive look includes a zip-up jumpsuit with elastic at your ankles and wrists as well as five patches that designate you a major player in the NASA squad.  The padded knee patches ensure that you won't have any breaches in your britches while you're investigating those mysterious moon rocks.  Double up the look with one of our astronaut helms or leap to the future with some space-age tech accessories.  And, while we're at it, we recommend hanging out with an alien buddy to really secure the stars!

THE TIME IS NOW

We've been a little lazy after that giant leap for mankind that left our footprints on the moon.  If we have any hope of making first contact with a species that is going to help guide us into the stars, we better get back out there!  Be the one to lead the charge with this Deluxe Astronaut Costume.