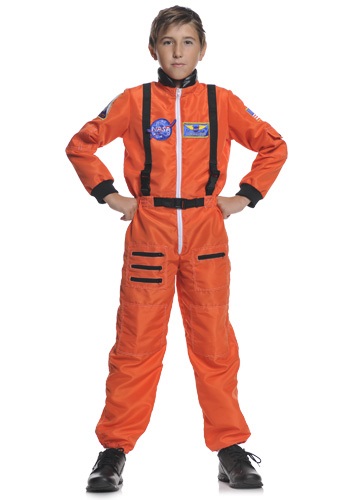 Sure, NASA will never say they're looking for the first kid they want to send to space, but your child knows better. NASA must be on the hunt for an exceptionally skilled kid to head out to the moon, right? To set another record first? And since they haven't announced one yet, it must mean they're still looking.

Which is probably why your kid is spending so much time preparing for his/her inevitable time as NASA's chosen one. Their room is covered in stars. They're constantly talking about weightless environments. They try to pull as many g's on their bike as possible in preparation for liftoff. Not to shabby. Next step, space camp. Then after that, naturally, they'll be ready for selection and for NASA's boot camp.

So since they're already committed to their role, you mine as well help them dress the part. Our Child Orange Astronaut Costume is a polyester orange jumpsuit. It has official-looking patches already embroidered on, a plethora of pockets for their space tools, and straps with parachute buckles (you know, like a safety harness). They'll be ready to fly when drop them off at NASA! Or space camp. Or the neighbor's, where they've been constructing a cardboard rocket. You know. For research.