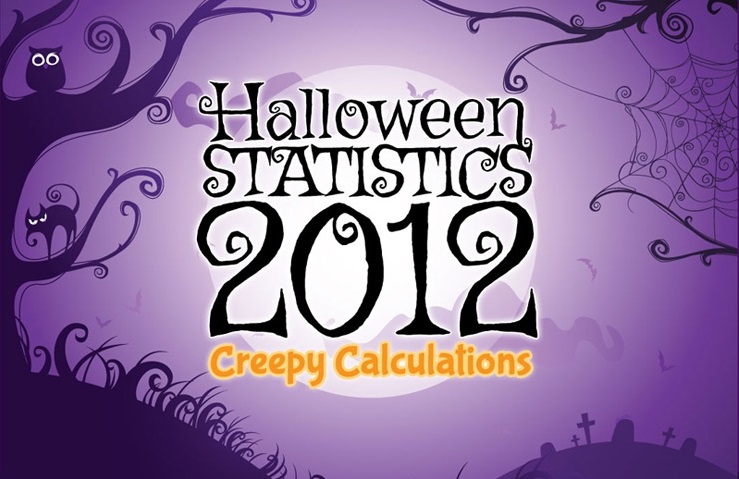 What are you most looking forward to this Halloween? Collecting copious amounts of your favorite candy? Dressing up in a trendy costume? Enjoying a horror movie marathon? Find out what other Americans will be up to this year, with our Ultimate Visual Guide to Halloween Statistics! You'll discover popular costumes for you and fido, a count-down of the best sweet treats, suggestions for a Halloween playlist and more spooktacular stats!

How Adults Plan to Celebrate Halloween

How Much Americans Spend on Costumes For...

15.1% of people, this Halloween, plan to dress their pet in costume.

Trick-or-Treating by the Numbers

Most (and Least) Popular Halloween Candy

Best (and Worst) Cities for Trick-or-Treating

Record Set by Chris Stephens of Stillwater, MN in 2010

Most played Halloween songs of Oct. 2010 according to Billboard.

IMDb's highest rated horror films released in the US.

Turn on Your Television

It's the Great Pumpkin, Charlie Brown has been shown every Halloween since its debut in 1966. This will be the 46th year it has aired.

The Modern History of Trick-or-Treating

Costume trends based on internal sales data and forecasting.

Q: How are adults planning to celebrate Halloween 2012?

Q: How much money do Americans spend on costumes for adults, children and pets?

Q: What are the top Halloween costume trends for kids, adults and pets this year?

Q: How many households plan on giving out candy?

Q: How many potential trick-or-treaters are there?

A: 41 million. That is the number of kids in the United States between the ages of five and 14.

Q: What are the most and least popular types of Halloween candy?

A: Based on a survey of more than 100 Americans, the most popular candy was chocolate candy bars. This is followed by chocolate candy pieces, then fruit flavored chewy candies, fruit flavored hard candies, seasonal candy like candy corn and caramel apples, lollipops and suckers, bubble gum, and lastly "other." This includes non-food items like toothbrushes, spare change, stickers, and coupons.

Q: What are the best and worst cities for trick-or-treating?

Q: How much does the world's heaviest pumpkin weigh?

A: According to the Guinness Book Of World Records, the heaviest pumpkin is 1,810 pounds. This record was set by Chris Stephens of Stillwater, Minnesota, in 2010.

Q: What are the most popular Halloween songs?

A: According to Billboard, the most played Halloween songs are "Thriller", "Monster Mash", "Ghostbusters", "Werewolves of London", and "Highway to Hell".

Q: What are the most popular horror movies?

A: According to IMDb, the highest rated horror films released in the US are "Psycho", "Alien", "The Shining", "Diabolique", and "The Thing".

Q: What is the most watched television Halloween special?

Q: What is the most popular Halloween literature?

Q: What are the most popular Halloween games for current consoles?

A: According to Metacritic, the highest rated horror games are "BioShock", "Demon's Souls", "Left 4 Dead 2", "Left 4 Dead" and "Dead Space".

Q: How did trick-or-treating start?

A: In 1895, there are records of children "guising," or going door to door collecting treats in costume. The first instance of guising in North America was recorded in Ontario in 1911. The book Hallowe'en in America described a process like trick-or-treating in 1919. The earliest record of the term "trick or treat" was in Alberta in 1927. And finally, in 1939 a national publication was the first to use the term "trick or treat" in the United States.