The Art of Cosplay

An alluring cosplay is more about how you project yourself while ‘in character,’ than about how revealing your costume is. A skimpy costume can look either stunning or sleazy, depending on how it’s worn. It’s all in the details, girls!

While it may be hard to feel pretty while wearing a giant Mecha suit, there are still some things you can do to help yourself feel and look sensational in any costume, regardless of how much or how little skin is showing.

Before you even pick a costume, learn to feel good on the inside first. It may seem strange for the first tip in a cosplay article to be non-costume-related, but I really feel that what makes the best costumes successful comes mainly from within the person wearing it, rather than the costume itself. When you have confidence in yourself and in what you’re wearing, it shows. 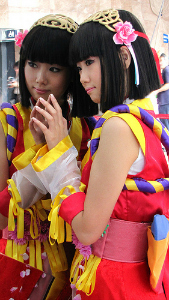 You have probably met someone who may not be considered ‘attractive’ by many people’s standards, yet they naturally exuded such joy, that others seemed to swarm around them, regardless. That’s charisma—an aura of confidence, but not arrogance, of someone who doesn’t need anyone’s permission to be happy! And a happy cosplayer is a more attractive cosplayer.

If you feel insecure or constantly anxious about what others may think of you, that attitude will always show up somehow, whatever you are wearing. Thankfully, regardless of whatever shortcomings you feel you may have, part of the fun of cosplay is that it’s about play-acting.

Therefore, if you don’t feel quite confident in ‘real life’, you can still play the role of a poised, glamorous figure when in costume, just for the fun of it!

Maybe you could start by noticing how your chosen character carries themselves in various situations. Then, practice recreating those postures and facial expressions in the mirror.

Remember that costumes on animated bodies translate differently when placed onto actual humans. You may need to account for this if you want to look and feel like the foxy minx you really are.

The beauty of having and utilizing this type of knowledge is that even if your figure doesn’t perfectly match that of the character’s (which it almost never does, don’t worry), you can ‘cheat’ by positioning the costume elements in a way that will fool the eye of the beholder into thinking that it does, at least from a distance! 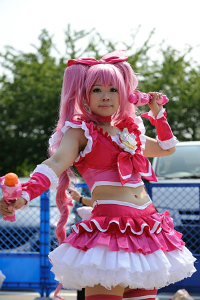 Another thing to consider when choosing a costume that feels and looks good on you is how comfortable you will feel wearing it. The fabric it’s made of can make a huge difference in this, especially if it’s the middle of summer and the character you want to recreate wears head to toe latex! It’s hard to feel comfortable, and thus look appealing, if you’re wincing in pain or about to pass out. So, check the weather and think ahead!

Get into role before leaving home on the big day by wearing your costume in front of a full-length mirror. Does your character have any signature poses? Try to mimic the best stances and facial expressions. It may also be handy to practice in front of a camera, since we often look different to what we think we do when we’re posing alone in front of the mirror. 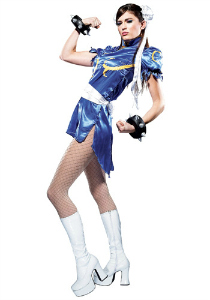 Remember that at the event, you could be photographed from almost any angle and at any moment. It’s worth doing some prior research to find out which poses and angles look the most flattering on you. Then, when you’re prompted for a photo at a moment’s notice, you’ll automatically be able to pose in a way that will look the most attractive for that particular situation. 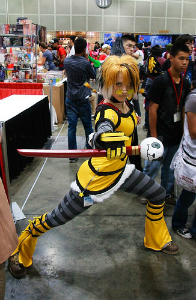 One point worth mentioning: don’t stand directly straight in front of the camera; it looks boring. Instead, tilt your waist to the camera slightly, with one leg partly in front of the other and your weight on your back leg. This position looks more flattering, and helps you to look slimmer, too!

Melinda J. Maxfield is a seasoned cosplayer and costume designer who writes for HalloweenCostumes.com, where there are plenty of standard and plus size Halloween costumes for women and men. Her years of experience have taught her that cosplay takes more than sexy costumes; it requires confidence, preparation and passion.