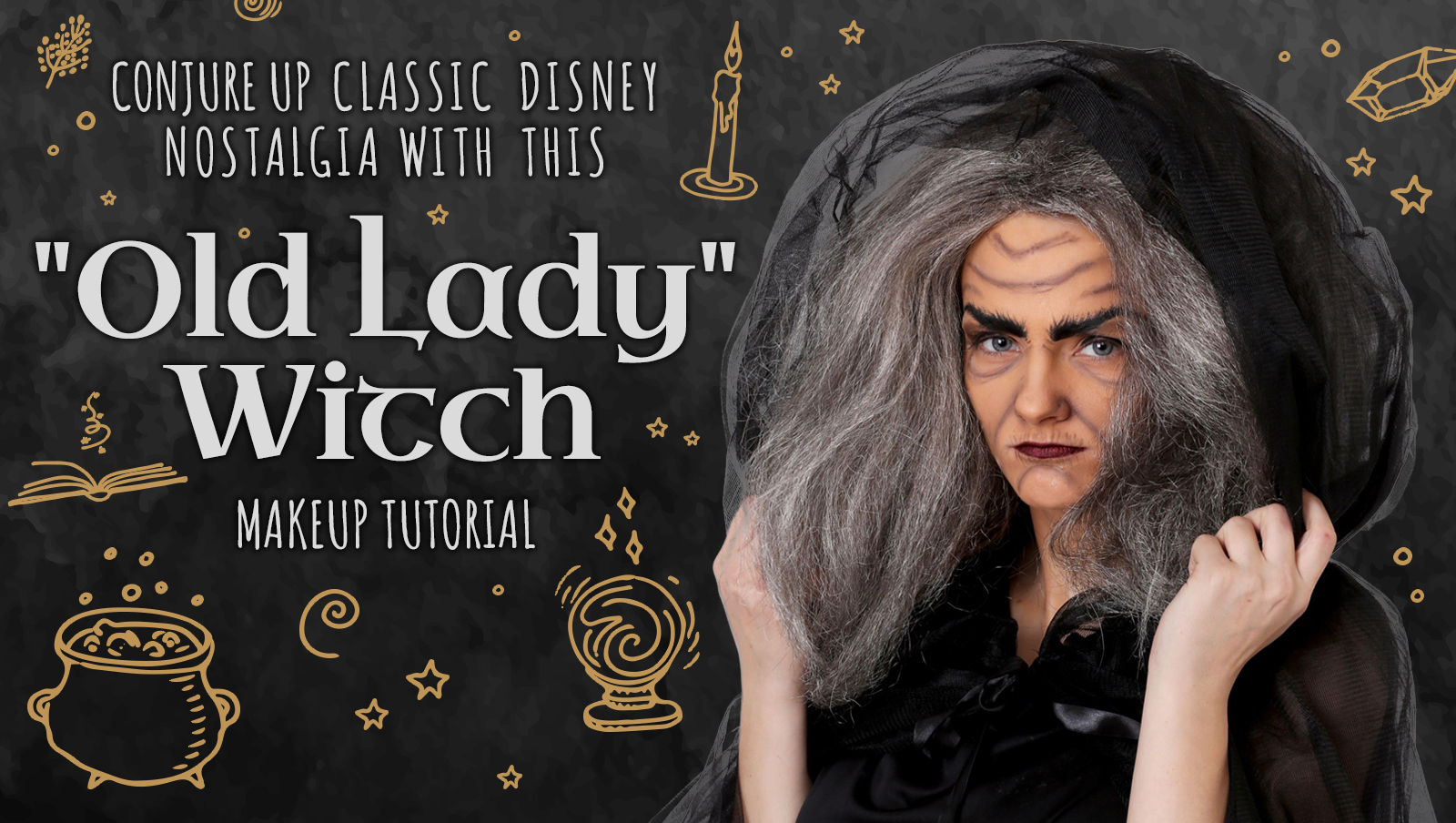 It's 2018, witches are no longer just women who wear capes and pointy hats. From the highly fashionable witches of American Horror Story to the satanic witches in The Chilling Adventures of Sabrina, there are many witches who are "going against the norm". And with so many non-classic witches becoming increasingly popular, maybe you're looking for something a bit different from the typical modern-day witch. Well here's an "old lady" makeup tutorial that's a bit witchy. That's right, conjure up some classic Disney nostalgia with this "Old Lady Witch" makeup tutorial. In under four minutes, we'll show you how to use the power of makeup to become an old, potion-making, apple poisoning witch.

Creating an old lady look can be really easy, and it doesn't take many tools. For this look, we wanted our model to look old and witchy, and we did it with only a few items from your everyday makeup collection and a glue stick.

For this witchy old lady look, I knew I would be exaggerating the arch of our model's eyebrows, so I used an ordinary glue stick to conceal about 2/3 of the outer portion of her eyebrows. It's a really simple process , and it washes out with plain soap and water at the end of the night.

I took a medium-brown eyeshadow and mapped out the arch I would follow to give the old lady makeup a sinister look. Next, I used a basic brown eyeliner pencil to create exaggerated lines along her forehead. After penciling the lines on, I took a small pencil brush and gave the lines a soft blend. I followed those same steps with the eyeliner pencil and fluffy brush to give the model heavy bags under her eyes, crow's feet, and deep-set smile lines. Using that same pencil and brush, I also gave the model a harsh contour line, and created a shadow on her chin.

After laying these lines out all over the model's face, it was time to enhance them. So, I went in with a super-fine brush and some dark brown eyeshadow to add further depth to the wrinkles. Then I went in with a black cream pencil to start the witchy-looking eyebrows. Following the line I created earlier, I filled in the front portion of the eyebrow heavily, and thinned the eyebrow out as it arched upward. Attach some black eyeshadow on top of the black cream makeup to set it in place, and then I took a fine-tipped brush and ran strokes up through the eyebrows to create a bushy look.

I highlighted the area underneath the arch with a lighter shadow, and then I used the darker shadow to create exaggerated, round eyelids. Next, I went in with a super-fine-tip brush, and more brown eyeshadow to add yet more dimension throughout the face. I created thin lines all around her lips, and I added small lines around the deep shadow lines I had already created around her face.

Lastly, I painted a thin, dark lip on the model, and made the final enhancements to her wrinkle lines. I gave her some eyeliner, and we popped on her wig, and she was ready to hit the town.

I'll put a spell on you.

The Costume, Wig, and Makeup

Luckily, you won't need to empty your bank account to get this complete look. Use the skeleton makeup kit to create the wrinkles, bushy eyebrows, and highlights to the face. If you don't have any blush or foundation on hand, the Graftobian tattoo coverup makeup wheel should be able to help do the trick! For the lips, we have a two-in-one red nail polish and liquid lipstick that will work perfectly to paint on those sinister lips. The costume and wig are the exact accessories we used for this tutorial, though obviously, you can switch it up however you'd like to match your personality. Whether you're a witch with a conscience or a witch powered by pure evil, be sure to check out all of our witchy wigs and witch costumes to make sure you've got the perfect pairing. If you'd like to check out all the options you have for makeup, be sure to check out our entire makeup collection here. 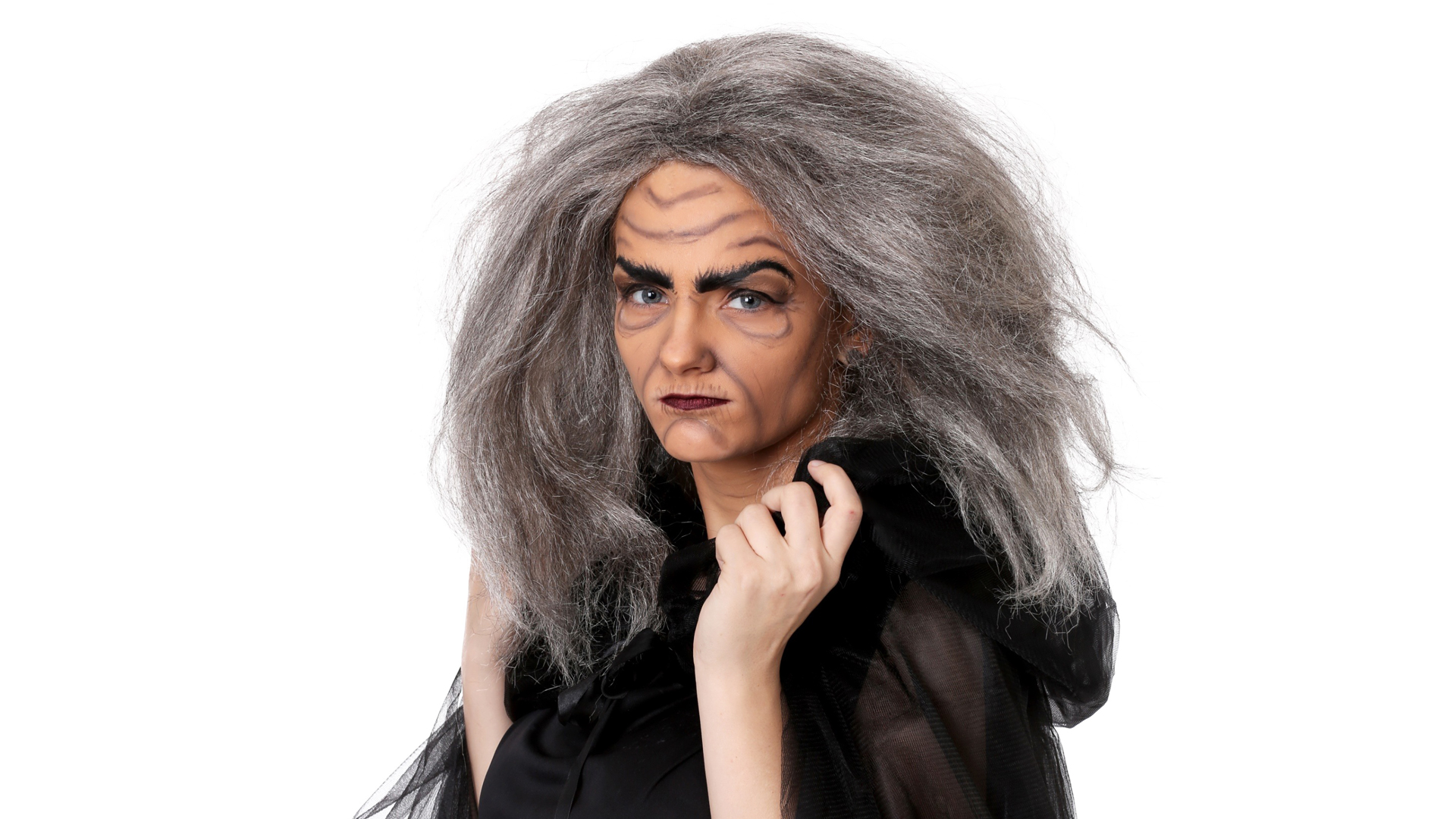 "One taste of the poison apple and the victim's eyes will close forever..." - Snow White and the Seven Dwarfs