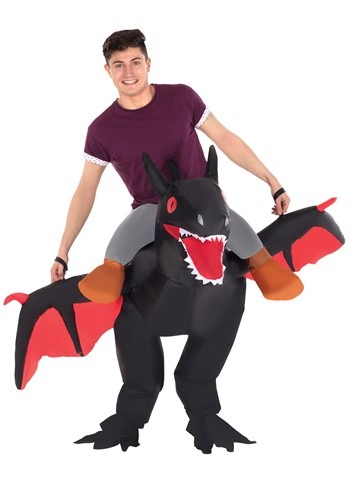 Legends of the rider and their mighty, winged beast have spread through the countryside like the wildfire that the dragon causes with its ferocious breath. The terrible growl can be heard even before the shadow of the vast wings can be seen. Terror strikes the hearts of all and they flee into their homes. It is a silly idea. Not only could the flames of the dragon turn that supposed safe place into a death trap... but the dragon and its rider are actually pretty awesome.

Turns out that the two make excellent friends and throw even better parties. They're surprisingly maneuverable around tight spaces while dashing to the kitchen to fetch up some drinks or tipping the pizza delivery person while flapping them a high wing. Naturally, the dragon is a little nervous around sharp objects... but that's pretty understandable given the history of dragons and nasty knights!

Get your wyvern riding on when you try this Inflatable Dragon Rider costume. This costume begins as a pair of pants with an elastic waist and ankle cuffs. Initially, your companion is going to seem a little deflated, but you'll be able to wake him up pretty easily with the magic of a few AA batteries and a fan mounted at your hip. Switch that on to hear your winged friend let out a rumbling roar and, in no time, you'll have a puffed out Puff! Wrist straps on the wings let you flap your ride's wings while the little legs will look like yours!

Book By The Cover

It's rather unfair to assume that the black dragon is an evil menace. He's sweet, soft to the touch, and loves giving dragon-back rides! (Plus, since he's only got hind legs, he's actually a wyvern and can't breathe fire at all!)