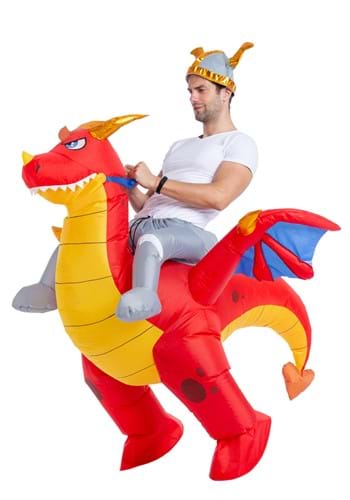 When you found that huge, ungainly egg in the forest and took it home for observation, you never dreamed that it would ever hatch into something so undeniably incredible. Now you have a friend for life, as well as a convenient ride that soars above the rush-hour traffic instead of getting stuck at its center. You've also made an important scientific discovery: Many bards and historians have written about dragons, but none of them mentioned that these awe-inspiring creatures need to be inflated daily.

Soar on high and inspire legends when wearing this Inflatable Riding-a-Fire Dragon Adult Costume! The hilarious and unique outfit is made of sturdy polyester windbreaker fabric. Step into the costume as though putting on a pair of pants and pull the drawstring waistband tight around your midsection. A battery-operated fan is mounted at the back of the costume: Once inflated, the costume looks like a fierce, two-legged dragon with outspread wings and a curled tail. Its "hide" is red with dark crimson spots, its underbelly is yellow, and its wings have blue and yellow accents. Golden horns, faux fangs and printed facial features add to the realism. A pair of inflated silver "legs" straddle the dragon's shoulders to make you look as though you're hitching a ride on your mythological friend.

Flight of the Fire Dragon

Spice up a knight costume or live out your dragon-trainer dreams! As with a traditional dragon, a knight's sword is a very real danger for your mighty steed, so make sure you give any of those Arthurian fellows a wide berth.